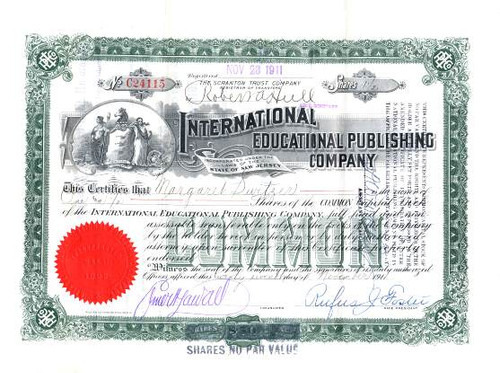 Beautiful stock certificate from the International Educational Publishing Company issued no later than 1911. This historic document was printed by Wilbur & Hastings, Lithographers, and has an ornate border around it with a vignette of the New Jersey state shield. This item is hand signed by the Company's President ( Rufus Foster ) and Treasurer and is over 98 years old.

Certificate Vignette
Publishers Weekly 1908 Scranton, Pa.--The incorporation of the International Educational Publishing Company with a capital stock of $20,000,000 brings to the front the International Correspondence Schools, located here. The incorporators are Thomas J. Foster, W. L. Connell, Thomas E. Jones, Jacob K. Griffiths and J. F. Jorline. The purpose of the company, it is said, is to extend the business of the International Textbook Company into English speaking countries at the present time and later into other countries. The Financial World - January 2, 1915 Published Saturdays by The Guenther Publishing Co.. 18 Broadway, New York. FOSTER'S SCHOOLS TO EXPAND AGAIN. Necessity, the mother of ambition, has evolved for T. J. Foster and his associate directors in the International Text Book Co., a plan whereby they may accouch another infant from the capacious womb of their present enterprises and start it out upon its stock-selling career. The new enterprise is a corporation which is to establish domestic science schools in various cities and it is to have affiliations with the International Text Book Co. and the International Educational Publishing Co., which latter company was forced to pay its last dividend with L O. U.'s payable two years hence. The new company is to start with a capital of $10,000,000, according to reports published in the Scranton newspapers. As to how the money to finance the new project is to be raised, no information so far has been vouchsafed. However, if the past financial methods hold out any suggestions with regard to future financing, we hazard the prediction that the present stockholders of the two educational corporations will be granted the privilege of getting in upon the ground floor. Some hint that a new project was in mind of the Scran- ton promoters, was given in a recent circular sent to the Educational Publishing Co. stockholders explaining why it was necessary to pay with notes the dividend then due. In this circular it was stated that it was hoped that by enlarging the correspondence curriculum of the schools to embrace a domestic science course, dividends could be quickly restored as it would remove from the schools the necessity to depend largely for revenues upon the business they have done in foreign countries. Nothing was said, however, about the new courses forming the nucleus of another enterprise. This information is to be submitted later when more than likely an invitation will be extended to the stockholders to buy shares. More money all the time. In Scranton the fever for expansion shows no visible signs of abating and will not until it happens that try as these promoters will no further capital will be obtainable. Since the Coal Land Securities Co. was forced to pay its dividend in "negotiable" paper there has been a severe fall in its stocks in the local market. As low as $12 for its $50 shares has been touched. To remedy this situation, which makes it almost futile for salesmen of the Coal Land Securities Co. to attempt to sell its shares, the promoters have decided to reduce the par value from $50 a share to flO a share. They give as their reason that it will act as a market stabilizer. The truth is that the change was made to conceal the enormous shrinkage in value. Still at $10 a share, at the present market value, the stock will have a nominal value of about $2.40 a share. What these Scranton promoters have still to learn is that they cannot solidify the water in their securities into macadam by fooling with its par value. A dollar of value remains simply a dollar of value. The facts are being driven home gradually upon the thousands of investors who hold these Scranton securities. They are getting into a state of mind where they desire to see tangible results and not a continuous program of financing.