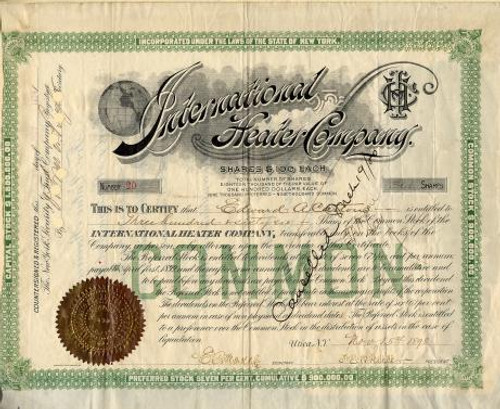 Beautiful certificate from the International Heater Company issued in 1898. This historic document was printed by Syracuse Lith and has an ornate border around it with a vignette of the company's name in clouds next to a world globe. This item is hand signed by the Company's President, Frank Erastus Wheeler and Secretary and is over 108 years old.

Certificate Vignette
WHEELER, FRANK E., is the only son of Russel Wheeler, who was born in Rome, N.Y., August 7, 1820, and died in Utica January 5, 1899. George Wheeler, father of Russel, was born in Glastonbury, Conn., in February, 1791, came to Oneida county with his father, and died on the homestead near Rome September 2, 1882. He had one daughter and seven sons, of whom Russel was the third. Russel Wheeler came to Utica in 1838 and entered the hardware store of John Mairs, where he remained four years. In 1842 he became bookkeeper for Joel C. Bailey, who had just purchased the Chester Dexter foundry on Columbia street. In 1844 he formed a partnership with Mr. Bailey, as Bailey, Wheeler & Co., which continued until 1855, when Mr. Wheeler bought his senior partner's interest. In 1865 he secured that of S. Alonzo Bailey and in 1887 he took his son, Frank E., into the business; two years later Francis Kernan, jr., became a partner, but on January 1, 1890, the Wheelers again became sole owners, the firm name being Russel Wheeler & Son. They manufacture stoves, furnaces, heaters, etc., and employ from 150-200 men. Mr. Wheeler was alderman in 1849-1850, a director in the Oneida National Bank, a trustee of the Savings Bank of Utica, for many years vice-president of the Utica Steam Cotton Mills, the Globe Woolen Mills, the Utica Willowvale Bleaching Works, and the Utica and Black River Railroad Company. He was also for many years a trustee of Colgate University. He was an extensive traveler, a man of unswerving integrity, and an influential, respected citizen. August 5, 1845, he married Amanda, daughter of Joel C. Bailey, of Utica, who died at Saratoga Springs, N.Y., August 29, 1884, leaving one son, Frank E., who was born in Utica in 1853. November 10, 1887, Mr. Wheeler married, second, Mrs. Katharine K. Anderson, of New York. Frank Wheeler was graduated from Yale College in 1876, and for several years has managed the business of the firm. In 1878 he married Louise Vanette, daughter of Hon. Cheney Ames, of Oswego, N.Y. History from Genealogy.