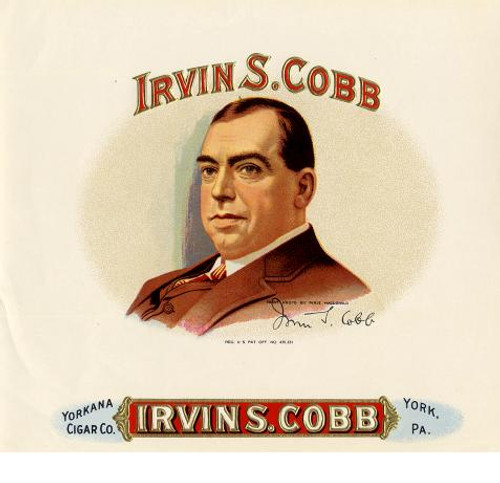 Beautiful Irvin S. Cobb cigar label from the Irvin S. Cobb Company . Irvin Shrewsbury Cobb (June 23, 1876 March 11, 1944) was an American author, humorist, and columnist who lived in New York and wrote over 60 books and 300 short stories. Cobb has been described as "having a round shape, bushy eyebrows, full lips, and a triple chin. He always had a cigar in his mouth." Cobb was the second of four children born to Kentucky natives in Paducah, Kentucky. His grandfather Reuben Saunders, M.D., is credited with discovering in 1873 that hypodermic use of morphine-atropine halted cholera. Cobb was raised in Paducah, where the events and people of his childhood became the basis for much of his later works. Cobb was educated in public and private elementary schools and then entered William A. Cade's Academy intending to pursue a law career. When he was 16, his grandfather died and his father became an alcoholic, so he was forced to quit school and find work, thus beginning his writing career. He started in journalism on the Paducah Daily News at age seventeen, becoming the nation's youngest managing news editor at nineteen. He later worked at the Louisville Evening Post for a year and a half. Moving to New York in 1904, he was hired by the Evening Sun, who sent him to Portsmouth, New Hampshire to cover the Russian-Japanese peace conference. His dispatches from the negotiations, focusing on the personalities involved (including President Theodore Roosevelt) were published across the country under the title "Making Peace at Portsmouth". They earned him a job offer from Joseph Pulitzer's New York World that made him the highest-paid staff reporter in the United States. Cobb covered World War I for the Saturday Evening Post, and wrote a book in 1915 about his experiences called Paths of Glory.