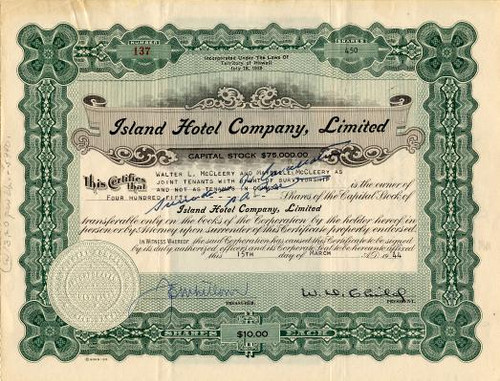 Beautiful certificate from the Island Hotel Company, Limited issued in 1944 during WWII. This historic document was printed by the GOES company. This item has the signatures of the Company's President, Walter D. Child Sr. and its Treasurer and is over 63 years old. The certificate was issued to Walter L. McCleery and Maybelle McCleery and signed by them on the back.

Certificate Vignette
The Island Hotel Company, Limited became InterIsland Resorts, Ltd. InterIsland Resorts, Ltd. operated the resorts of the Kona Inn,Naniloa Hotel,Kauai Surf and Kauai Inn. Walter D. Child Sr. was a sugar-industry executive and owner of the historic Blaisdell Hotel in downtown Honolulu. He was the dean of many early isle hotel men. He owned the Blaisdell Hotel on Fort Street in the 1930s and later formed Surf Resorts, with properties on Kauai, Maui and the Big Isle.