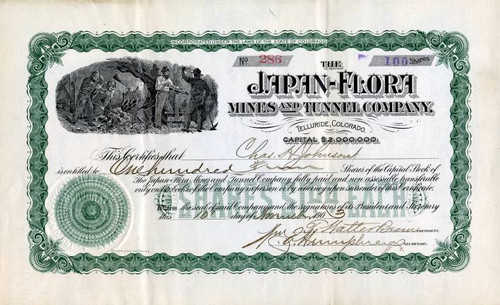 Beautifully printed certificate from the Japan - Flora Mines and Tunnel Company dated 1903. This historic document was printed by the Denver Litho Company and has an ornate border around it with a vignette of miners working underground. This item has the hand signatures of the Company's President ( Jessee Walter Beam ) and Secretary ( William E. Humphreys ) and is over 114 years old.

Certificate Vignette
JAPAN-FLORA MINES & TUNNEL CO. COLORADO Idle. Office: 702 Colorado Bldg., Denver, Colo. Mine near Telluride, San Miguel county, Colo. Incorporated on Aug. 22, 1903, in Colorado. Capitalization., $2,000.000; $1 par; fully issued. Bonds: $300,000 authorized, at 6%; issued, $251,200. Annual meeting in October. Property: 43 patented claims, 311 acres, and a 5-acre mill-site at Pandora, in the Upper San Miguel district, 4 miles from railway. Property shows 5 fissure veins, in brecciated andesite and porphyry, 3 being exclusively developed and said to show a width of 1' to 8', carrying complex sulphide ores with gold and silver, associated with pyrite, in a quartz gangue. Ore assays 7.5 oz. silver, 34% copper, 7% lead, and 5% zinc, which, with the gold content, brings value of the ore to about $14 per ton. Development: by tunnels from 500' to 2,752' long with total workings of 30,000'. Lowest point is 900' below the surface. Ore reserves: are estimated at 86,000 tons of $14 ore. Equipment: includes 50-ton concentrating plant. Property has produced considerable ore in the past, the last shipment, in 1910, averaging $47.85 per ton. JAPAN, FLORA, AND AJAX VEINS Located in 1877, the Flora was the first claim staked on what came to be known as the Japan vein. The claim was patented in 1883 by Thomas Thomas and Thomas E. James. Corregan and Lingane (1883) report that the vein was 4 feet wide with a 14-inch paystreak that contained "gold-bearing quartz and some tellurium." Burchard (1883) also reports tellurium. These reports indicate that the old-timers knew tellurium was present in the district's ore. We now know that the amount is small, but it is there and was known at an early date. Mill-grade ore from the Flora vein, after being sorted and concentrated, yielded 1.5 ounces of gold with 250 ounces of silver per ton (Corrigan and Lingane 1883). Burchard's (1883) report for the previous year indicated that the ore ran 14 ounces of gold with 10.5 ounces of silver. Corregan and Lingane state that the vein had been developed via an open cut, a 35-foot-long adit and 25- and 15-foot-deep shafts; Burchard simply states that there were 70 feet of development. These reports, both by reputable parties, show the problems and discrepancies inherent in these early accounts of mining in Colorado. The I. X. L. (pronounced "I excel") was located in 1882 as an extension of the Flora vein by the Henry brothers--Thomas, James, and Ed. A year later only minimal development had taken place--a 10-foot shaft had been sunk to tap a 9-inch paystreak in a 4-foot-wide vein. The pay streak assayed $40 per ton (Corrigan and Lingane 1883). The location certificate for the Japan lode (Mineral Survey No. 5637) is dated 18 August 1889 and was filed by Jesse W. Beam, who, in partnership with a Massachusetts man named Smith, was granted a patent. Beam went broke in a Ouray mining deal and walked back to Telluride, where he worked the Japan lode for several years at a considerable profit before selling out two-thirds of his operation to A. J. Clark and well-known known mining man David Swickhimer,(*) discoverer of the Enterprise mine at Rico. Beam managed the property for the new company. At some point before 1900, the Flora, Japan, and I. X. L. claims were consolidated and came under the same ownership as both the Ajax and Valley View groups of claims (Denver Republican, 1 January 1897; Engineering and Mining Journal, 4 February 1904, 21 July 1906, 4 August 1906). The Ajax vein had been staked over its length by five adjoining claims located in 1878--the Ajax, Bobtail, Nero, Park View, and Union Flag. All were patented in 1883 by the Eclipse Mining Company, which had been incorporated a year earlier with capital stock of $50,000. A year later the mine was developed via three adits (40, 100, and 400 feet long) and three shafts (each 30 feet deep). Immediately adjacent to the claims along the vein the company owned four patented mill sites of 5 acres each (Corregan and Lingane 1883). The Valley View had been staked about 1880 but was sold in 1896 to a group of investors that included David Moffat, a well-known Colorado mining man, financier, and Denver banker. The Valley View's role in the consolidation was apparently to furnish the site for a deep tunnel to be driven to the Japan-Flora. Despite a relatively small-scale mining effort, the Japan-Flora Mining Company had produced around $1 million through 1905. In 1904 the company announced plans to build a new mill at Pandora. They also planned to construct an aerial tramway to bring ore to the mill. Apparently these plans were never carried out. According to Harriet Fish Backus (1969), whose husband, George Backus, worked as an assayer at the mine when they were first married in 1906, the property shut down early in 1907 as its potential sale began to develop. The prospective buyer carried out a considerable underground prospecting/development project in preparation for a large-scale mining effort should the purchase be made. In the spring of 1907, Consolidated Mines Selection Company, Ltd., of London purchased the Japan-Flora group with the Ajax and Valley View for $600,000 (Engineering and Mining Journal, 4 February 1904, 21 July 1906, 4 August 1906, 15 June 1907). The new company had been organized several years before the purchase in order to carry out its prospecting/development project, which would eventually cost $250,000. The company drove a 2,700-foot-long crosscut tunnel that cut the Japan-Flora vein 860 feet below the lowest workings of the mine. In order to prove up the vein, drifts were run along the vein in both directions, and a raise was driven to connect with the lowest level in the old workings above. The old concentrating mill that processed ore from the old upper workings had already been restored, as had a compressor plant to run machine drills. The plan was to block out 100,000 tons of ore. A mill site was purchased just below the Smuggler Union mills at Pandora. As production grew, the new company planned to construct a large concentrating and amalgamating plant on the site (Engineering and Mining Journal, 21 July 1906, 4 August 1906).