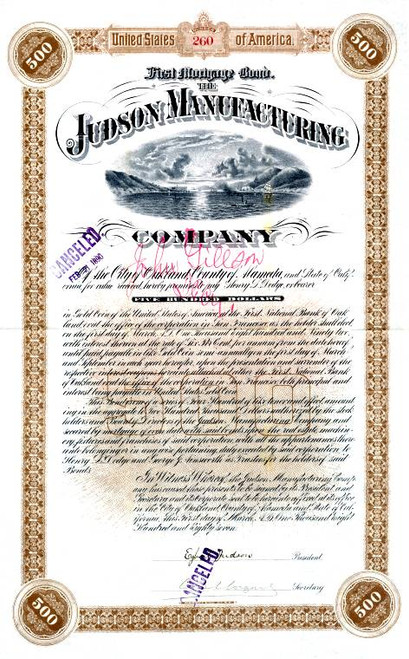 Beautifully engraved certificate with no cancellation in the vignette from the Judson Manufacturing Company issued in 1887. This historic document has an ornate border around it with a rare vignette of a sunset in San Francisco Bay. This item is hand signed by the Company's President and Founder ( Egbert Judson ) and Secretary and is over 133 years old. Folds from original storage. The certificate is also sign by the companies Trustees, Henry Lee Dodge and George J. Ainsworth. 10 cancelled coupons on right side.

Sunset in San Francisco Bay.
The Judson Manufacturing Company was founded in 1882 and the operations comprised of a complete bridge and structural steel shops, machine shop, foundry and pattern shop and bolt and nut shops. They were equipped with oil heating furnaces and two 10 inch on one 16 inch bar mill. They had operations in Emeryville and Oakland California. JUDSON, EGBERT PUTNAM (Aug. 9,1812 - Jan. 9, 1893), inventor and manufacturer of explosives, was born at Syracuse, N. Y., the son of William and Charlotte (Putnam) Judson. Very little is known of his early life beyond the facts that he was educated as a civil engineer and joined the rush to the California gold fields in 1850. He is said to have founded the first assay works in San Francisco in 1852, and about 1867 was one of the organizers of the San Francisco Chemical Works (Judson & Sheppard). In August 1867 three pounds of dynamite were made at this plant and used in a trial blast of boulders. This is considered to be the first instance of the manufacture and use of dynamite in the United States after the invention of that explosive by Alfred Nobel in 1866. The trial was successful and led to the formation of the Giant Powder Company in the same month. Judson, a director of the Giant company, continued to operate the San Francisco Chemical Works which supplied acid to the Giant company, and shortly afterwards formed the Judson Powder Company at Kenvil, N. J. On June 3, 1873. he patented his "Giant Powder, No. 2" (patent no. 139,468), which was manufactured successfully by both companies. This powder consisted of forty parts nitroglycerine, forty parts sodium nitrate, six parts sulphur, six parts rosin, and eight parts kieselguhr, and was essentially a blasting powder. "Giant powder" was for a long time a synonym for dynamite in the United States. Judson was the first to meet the need for an explosive which, though powerful, would be more "gentle" in action than a blasting powder, producing a heaving rather than a shattering effect. The first such explosive was patented by him on Oct. 31, 1876 (patent no. 183,764. reissued 4, 568). As it was particularly well suited for moving banks of rock and earth in railroad construction, it was marketed as railroad powder or "Judson's RRP," in various grades designated by number. Railroad powder as a class developed from this invention. Judson was interested in many successful mining enterprises, including the Alaska Treadwell Gold Mining Company and the Anaconda Mining Company; and he founded the Judson Fuse Works, Judson Iron Works, Judson Candle Works, and Butterworth & Judson Chemical Works. He was a man of aggressive character and great business ability. At the age of seventy eight, as a final gesture, he sold his interest in the Giant Powder Company when that company stopped buying acid from his chemical works. and promoted the Judson Dynamite & Powder Company, a $2,000,000 concern, which competed successfully with the Giant company. At the time of his death, which occurred in San Francisco, he was president of the Judson Manufacturing Company and the California Paper Com- pany. He never married. Henry Lee Dodge was born on January 31, 1825, to Nathan and Hannah Dodge in Vermont. Little is known of his early life in New England. In 1849, he set out westward with a party of New Englanders. They were the first party to make the trip to San Francisco via Vera Cruz, Mexico, overland to San Blas, and thence by sail to San Francisco, arriving June 1, 1849. Dodge immediately set out for the mines, but he was quick to realize that there were greater opportunities in San Francisco than in the gold mines. After a few months he returned to San Francisco and became secretary of the town council. The next year he became Town Clerk under Mayor Colonel Geary, and in 1852 he opened a law practice. In 1856, he left the law practice to establish a wholesale provision business later known as Dodge-Sweeney & Company. In 1861, Henry Dodge became a town supervisor, and in 1863, the year that he helped found The Firemans Fund, Dodge was elected to the state senate. In 1877, he was appointed superintendent of the United States Mint in San Francisco, and in 1885 he was made president of the San Francisco Chamber of Commerce. A long-time president of the Society of California Pioneers, Henry Lee Dodge was not only a founder of Fireman's Fund, but, through his civic and business service, a founder of San Francisco. He died in 1901, at the age of 76. George J. Ainsworth (April 13, 1852 - October 20, 1895) was the son of prominent businessman John C. Ainsworth. · First class to graduate from UC Berkeley in 1873; earned Doctor of Philosophy degree. · Became an Oregon steam ship captain in 1875. · In 1882 George took charge of his fathers' business in Oakland, until his father's death in 1 893. · Active member of the Ancient Free and Accepted Masons, honored with the 33rd degree. · Member of the Mystic Shrine. · Father of L. S. Ainsworth and Mabel Ainsworth. · Executor of his father's estate until his death in 1895. History from OldCompany.com.