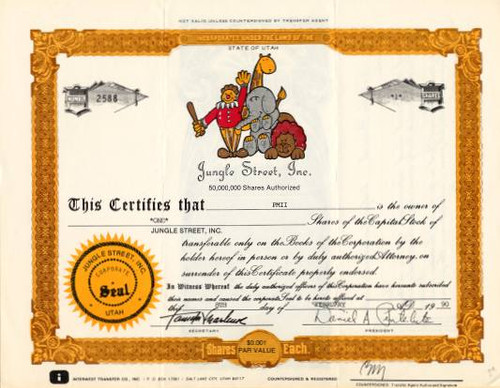 Beautiful stock certificate from the Jungle Street, Inc. issued in 1990. This historic document has an ornate border around it with a vignette of clown with jungle animals. This item has printed signatures by the Company's President and Secretary and is over 25 years old. 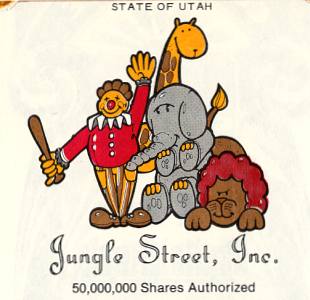 Certificate Vignette
Company Background from SEC filing: Jungle Street, Inc. was incorporated July 10, 1980, under the laws of the state of Utah. In August 1980, Jungle Street, Inc. acquired Utah real estate using the proceeds of a limited public offering conducted in Utah. From inception, Jungle Street, Inc. suffered losses from its real estate operations, and, in 1993, Jungle Street sold all of its Utah real estate and became an inactive corporation. On August 29, 1996 Jungle Street, Inc. merged with Televar Northwest, Inc., a Washington corporation. The merger was accomplished through Jungle Street, Inc.'s wholly owned subsidiary, a recently formed Washington corporation with the same name. The subsidiary was the Surviving corporation in the merger. However, because Jungle Street's assets, liabilities and operations are nominal, these financial statements include the activity of both Televar Northwest, Inc. and Jungle Street, Inc., retroactively restated to the beginning of the periods covered herein. Unless otherwise specifically stated, the combined companies are hereafter collectively referred to as the "Company." The Company is in the business of providing Internet access and long distance telephone service. The Company markets its services primarily through a network of Value Added Resellers ("VAR") in the geographical region of the northwestern United States. The VARS are assigned a specific territory from which they market the Company's services. In February, 1995, the Company disposed of its telephone equipment and servicing business. The Company has also been involved as a wholesaler of cellular telephone access. However, the Company's contract with its cellular telephone access provider has terminated. Although the Company may re-enter this segment of business, it is currently emphasizing Internet access and long-distance telephone service. History from Old Company Research Service.