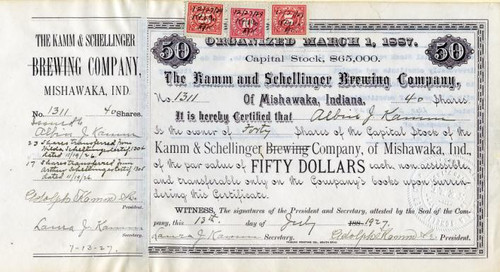 Beautifully engraved RARE Certificate from the Kamm and Schellinger Brewing Company issued no later than 1927. This historic document and has an ornate border around it with an imprint of the corporate seal. This item is hand signed by the Company's President ( Adolph Kamm ) and is over 89 years old. 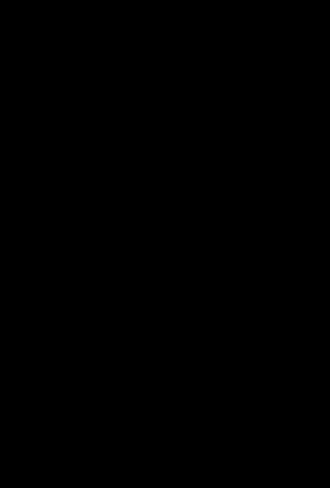 Early Company Advertising Poster Shown for Illustrative Purposes
Kamm and Schellinger Brewing Company In the late 19th century Germans immigrated in great numbers to the U.S. As might be predicted, the more Germans that came, the more breweries that opened. Almost every state had a brewery, and Indiana's fine beer was Kamm and Schellinger Brewing Company of Mishawaka. The original brewery was built in 1853 by John Wagner who made a "fine grade of corn whiskey" which sold for 25 cents per gallon. In 1870 the brewery was purchased by a German immigrant, Adolph Kamm. In 1880 Adolph Kamm's brother-in-law, Nicholas Schellinger joined the company which became the Kamm and Schellinger Brewing Company. Extensive improvements and additions were made to the brewery as the original wood frame buildings acquired brick fronts. The brewery workers themselves built the ice house, ice storage and malt and yeast rooms. Also constructed was a large vault deep below the surface of the ground and under the brewery. In this vault charcoal was made which was used in the brewing process to filter the beer. As the beer was made it was stored and kept cool in wooden kegs. The brewery had become one of the largest commercial enterprises of the area when prohibition stopped the production of beer. The brewery soon converted the distillation processes into producing various soft drinks and distilled water. In 1927, the Schellinger family withdrew from the company and Adolph Kamm along with members of his family continued the operation. In 1933, with the repeal of prohibition the firm was the first in Indiana to have beer on the market and the brewery continued to prosper. In 1950 a serious fire swept through the building and the brewery was closed in 1951. Local businessmen purchased the site in the late 1960's and turned it into a delightful complex of shops. The 100 Center now encloses quality specialty shops, galleries, restaurants, twin movie theaters, and a motel. It is listed on the National Register of Historic Places. The Island Queen, a sternwheel, double-deck passenger boat, offering cruises, also is docked here. History is from the 100 Center Complex website.