Beautifully engraved certificate from Ket Forint dated 1852. This historic document was printed by Toppan, Carpenter, Casilear & Company and has an ornate border around it with a vignette of an allegorical woman leaning against a shield. This item has a printed signature and is over 155 years old. written in Hungarian 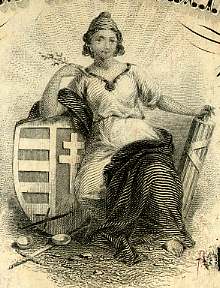 Certificate Vignette
Independent Hungarian Government. The revolution of March 15, 1848 was a milestone in the history of revolutions in Europe. Bowing to pressure from the masses, the Hungarian Diet accepted most of the revolutionaries´ demands, including the liberation of the serfs, equality before the law, freedom of the press and an independent Hungarian government. In September 1848 the imperial Austrian government launched an armed attack on Hungary in order to crush the revolution and do away with its achievements which had earlier been approved by the emperor. The Hungarian revolution that began with such hopes in March, 1848, ended in blood in August of 1849. It was the longest of all the European revolutions of the mid-19th century. Its failure was due mainly to the fact that its leaders, in spite of idealism and liberal ideas, had not found a solution to the problem of nationalism. Inspired by a romantic patriotism and blinded by their own enthusiasm in creating a Hungarian state both national and independent, they alienated the ethnic minorities who were themselves awakening to their own national identities. In their rush to destroy the traditional structures, the revolutionaries put a match to the powder keg of central Europe and cleared the way for open conflict between the different nationalities. In the short run, the revolutions of 1848 appeared to have failed without exception. The framework created by the Congress of Vienna appeared to have remained intact, despite the absence of Metternich. Viewed from a different angle, however, the revolutions left their mark. Some important reforms passed by the revolutionary regimes remained: feudalism was definitively abolished and the equal rights of all Austrian subjects proclaimed. And a problem that had never troubled the Habsburgs before had been raised. The questions of relations between the different nationalities and of nationalism itself were to trouble the Austrian Empire up to its dissolution.