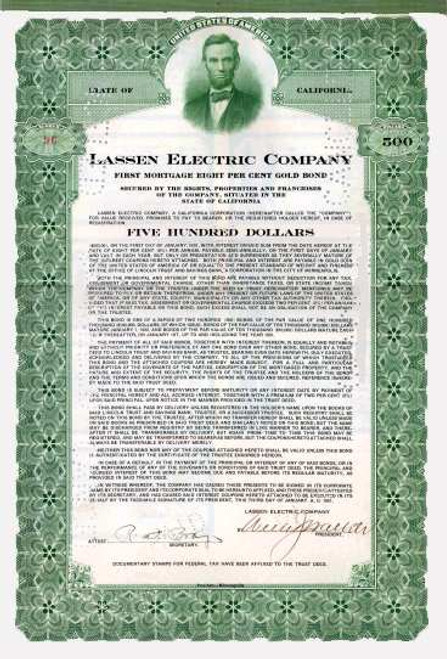 Beautifully engraved certificate from the Lassen Electric Company issued in 1921. This historic document has an ornate border around it with a vignette of President Lincoln. This item is hand signed by the Company's President and Secretary and is over 84 years old. 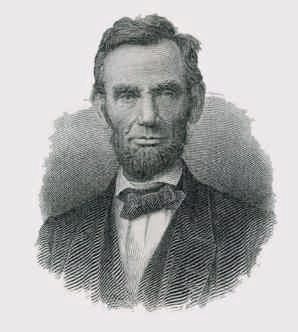 Certificate Vignette
In the 1840's, John C. Fremont and his army followed the trails left behind by fur trappers xploring the area in the 1830's to prepare for the Bear Flag revolt, which led to the creation of California. With the Gold Rush of 1849 and emigrants following established trail routes through the area, it was not until 1854 that the area began to take shape, as a trading post was established on the west end of Honey Lake Valley.A small gold rush just south of the trading post two years later caused the permanent settlement of Honey Lake Valley and Lassen County. In 1863, due to a growing dispute over land boundaries and taxes, the Sagebrush War ensued. After a victorious end for the residents in the area, Lassen County was created. By 1880, many settlements had sprung up in the area, and the railroad industry had begun to develop interests in the area. The Nevada-California-Oregon Railway (NCO), which operated from 1880 to 1927, was the longest narrow gauge line in the nation in this century, traversing the eastern side of the County and assisted in the development of the high desert region of eastern Lassen. The Fernley & Lassen Railroad, built in 1913, tapped into western Lassen's timber resources. Also shaping the area at that time was the lumber industry, particularly the Red River Lumber Company of Westwood, the world's largest electrical sawmill of that time, and two other large mills which developed in the Susanville area. Other towns in the area, (Herlong, Janesville, Doyle, Standish, Bieber Hayden Hill and Wendel) all had their place in developing County of Lassen during this time as well.