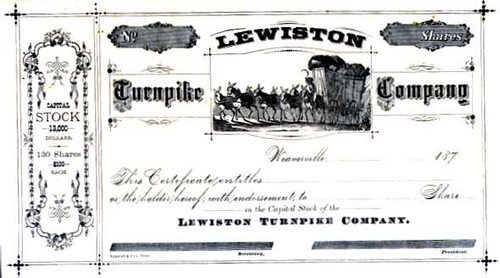 Beautifully engraved unissued certificate from the Lewiston Turnpike Company dated 187X. This historic document has an ornate border around it with a vignette of a donkey drawn wagon. This item is over 131 years old. Weaverville is another "goldtown." In only a few years, its population swelled up to 3,000 people, more than half of which were Chinese miners. In 1850, a Mississippi man by the name of John Weaver arrived in the locality, one of the remotest sites in California at the time. Located in the Trinity Alps, incoming mule trains carrying food and other supplies were often unable to get through to the town. The snowdrifts were simply too deep during the winter and spring months. This made for short tempers and occasionally violence would flare up. Weaverville got along without a jail for quite a while by the simple matter of quick execution or release. As did happen in other towns, fire was the cause to use brick during any rebuilding process. Weaverville today is not a ghost town and has much to offer of what it was like in its heyday.