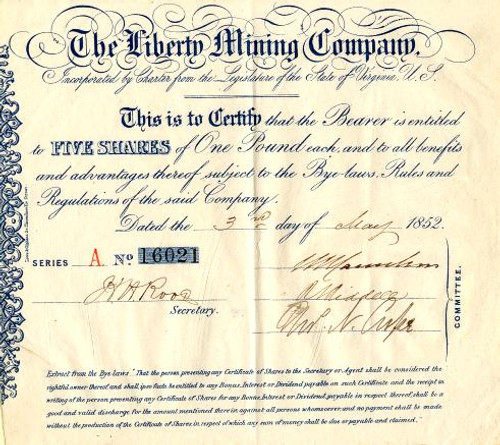 Beautiful certificate from the Liberty Mining Company issued in 1852. This historic document was printed by Lowe & Oliphant and has an ornate side border with the company's name on top center. This item has the signatures of the Company's Committee and Secretary and is over 159 years old. The stock was issued in England for Five Shares of One Pound each. The Metallic Wealth of the United States - 1854 Liberty Mining Company. (100,000 shares at £1.) This is an English Company, which has purchased the Vaucluse and Gryme's Mines, for which £ 50.000 was paid. The average yield of the ore is estimated at $8 per ton. Six shafts have been sunk, and preparations made for working a large quantity of ore. According to the Directors' report, made Sept. 30th, 1853, the amount of gold produced during the year, the mill running eighty days, was 55(i oz. 6 dwts., of a fineness of 943^ thousandths. In December, 1853, the stamps were crushing 50 tons per day. The vein or lode worked consists of five parallel bands of quartz, all bearing gold. Hydrated oxide of iron is the principal associated mineral, and the enclosing rocks are talco-micaceous slates. Previous to 1852, the mine had been worked in two open cuts, to the depth of C0 feet, 75 feet wide, and 120 feet long. From a description of these mines, published in 1848, the following information is extracted. The Vaucluse Mine is situated in Orange County, a mile south of the Rapidan River, about seventeen miles from Fredericksburg. It was discovered in 1832, and, for a number of years, worked as a deposit mine, before any veins were discovered. There are numerous veins now known which are contained in talcose and other slates. The gold is contained in quartz, and in the adjoining slates, which are much mixed with decomposed iron pyrites. Sometimes the auriferous belt widens out to 30 or 40 feet. The present establishment was commenced in 1844 by an English Company, and extensive works were erected. A Cornish engine, of 120 horse power, was connected with six Chilian mills, and six batteries of stumps, of three stamp-heads each. The finer ores are ground in the Chilian mills, and the harder quartz rock is stamped. The amalgamation is effected by the "amalgamating bowls." The quantity of mercury annually consumed is stated at from 250 to 300 lbs. The amount of gold produced, however, is not given, nor the quantity of ore ground and stamped. The gold obtained is very fine, being from '985 to '990. Gardiner Gold Minitiy Company, Spottsylvania County. Situated at the junction of the Rappahannock and Rapidan Rivers ; but little work has ever been done here. A steam-engine is now erecting, intended to drive two of Gardiner's gold-crushing machines, which arc estimated to crush and amalgamate 100 tons of rock per day, the expense being $3, and the yield of gold $12 50 per ton. Bedford County is located in southwestern part of the state of Virginia, between the cities of Roanoke, to the West, and Lynchburg, to the East. It is bounded on the North by the Blue Ridge Mountains with the majestic Peaks of Otter, and on the South by Smith Mountain Lake, and on the East by the James River. The Fourth Duke of Bedford, John Russell, gave Bedford its name. In 1754 Bedford County was formed from Lunenburg County and was named for Bedford, who was then Secretary of State for Great Britain during the reign of King George II. Although New London, in Bedford's eastern section, was the first county seat, the seat was moved to the more centrally located town of Liberty in 1782. This is the present-day City of Bedford. Bedford County is one of the fastest-growing counties in the Commonwealth of Virginia. It encompasses 764 square miles of Piedmont Plateau in the Western Central portion of Virginia and is bordered by the Blue Ridge Mountains to the west, the James River on its northeast and Smith Mountain Lake to the south. It has rolling, hilly terrain with elevations ranging from 800 to 4200 feet above sea level. In 1782, the Town of Liberty (now the City of Bedford) was established. The Town of Liberty was changed to the Town of Bedford in 1870 and to the present-day City of Bedford in 1912. The city covers an area of 6.81 square miles of history, culture, outstanding architecture, boutiques and fine dining. Thomas Jefferson, architect of The University of Virginia, author of The Declaration of Independence and President of the United States, chose to build a home in Bedford - Poplar Forest, which Jefferson designed as his personal retreat. Robert E. Lee, the Confederate's general and loyal Bedford visitor, rode his horse, Traveler, farther up Sharp Top at the Peaks of Otter than anyone else. And the Beale Treasure - an elusive horde of gold, silver and jewels and a complicated, only partially solved, code - draws treasure hunters from all over the world.