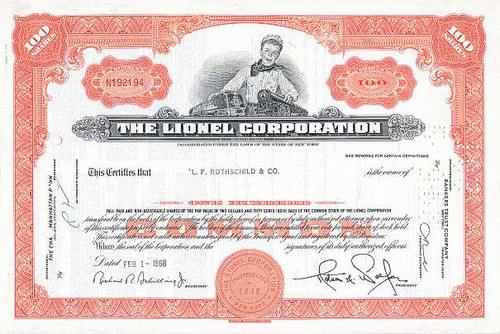 Beautifully engraved certificate from the Lionel Corporation issued no later than 1964. This historic document was printed by the Security Banknote Company and has an ornate border around it with a vignette of a young boy with 2 trains. This item has the printed signatures of the Company's President and Secretary and is over 56 years old. 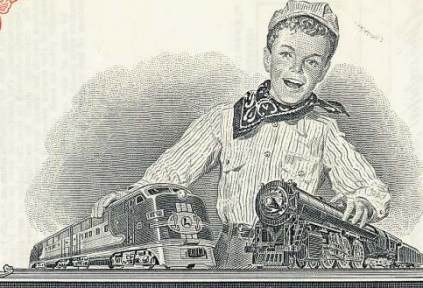 Certificate Vignette
Below is a little history of the famous toy train company: Joshua Lionel Cohen born, eighth of nine children. Cohen would later change his last name's spelling to Cowen in 1910. The first electrical Lionel train, begins production in the early 1900s. Lionel produced its first accessory, the 340 suspension bridge, also the first animated car. The Standard gauge trains was another product line for the 1900's. There product line included steam locomotives, cars, freight cars and caboose, multi-volt transformers. In the 1920's Cowen hires Frank Pettit, designer of the Lionel product features animated accessories. In 1925 the celebrate there anniversary. They purchased Ives and gain use of the E-Unit that is still used in principle today. In the 1930's the largest of standard gauge steam engines the 400E that headed up the famous Blue Comet was offered. Lower priced trains was also offered but never really caught on with the consumers. Mickey & Minnie mechanical handcar was the first of many Lionel Disney train items. Streamlined diesels are produced as well as the whistle in the steam engines. The Lionel 700E New York Central Hudson came to being, one of the prized engines for collectors. Several new accessories was produced in the 30's as well as the 00 train line. A number of popular animated accessories are introduced, including the 313 bascule bridge, the 164 log loader, Lionel then ceases production of electric trains and accessories because of wartime efforts. After the war trains were once again being produced but in limited quantity. In the next few years many new engines went on sale, some with the new smoke pellets. The famous and powerful ZW came to being. The 50's introduces Magne-Traction which helps the engines grip the rails better, which allowed for improved ability for inclines as well as pulling power. Many new sets where offered in the O and O-27 gauge. Another favorite among collectors was the introduction of the 773 Hudson, and several diesel engines. In the early 50's record profits for the firm was realized, Lionel was a household name. Another favorite was the introduction of the 6464 box cars as well several new popular accessories. Let us not forget that the introduction of the girls set was first introduced along with the popular HO trains. In the 60's new management continues to struggle, they introduce what they called the "father and son" set for the catalog's. Some bizarre and interesting products emerged in the mid 60's, many flat cars with interesting loads came about. The Company filed a petition under Chapter 11 of the Federal Bankruptcy Code in the United States Bankruptcy Court for the Southern District of New York, New York, NY on June 14, 1991. The Company's Liquidating Plan of Reorganization, filed under Chapter 11 of the Federal Bankruptcy Code in the United States Bankruptcy Court for the Southern District of New York, New York, NY was confirmed on December 12, 1994.