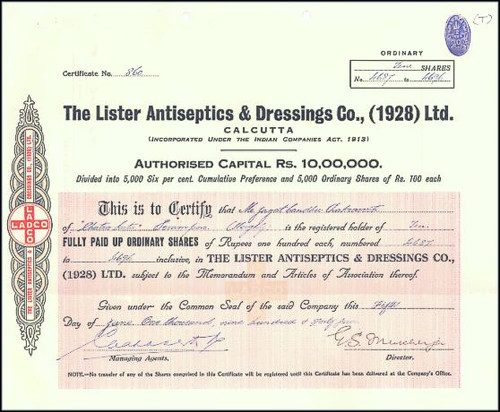 Beautifully engraved certificate from the Lister Antiseptics & Dressings Company issued in 1944 during WW II. This item is hand signed by the Company's Director and Managing Agent and is over 59 years old. The two perhaps most important contributions to antiseptic procedures in the medical arts both happened during the last 150 years. The French chemist and microbiologist Louis Pasteur set the stage for the later appearance of British surgeon John Lister who pioneered antiseptic operating room procedures (and after whom Missouri physician Joseph Lawrence named his antibacterial mouth wash). In a time when surgeons operated in their street clothes, surrounded by similarly clothed (and septic) onlookers, and just after surgical instruments were finally being washed in soapy water between operations, Lister campaigned for heat or chemical sterilization (and for surgeons to use something other than sawdust swept up from the floors of the mills, used in surgical dressings).