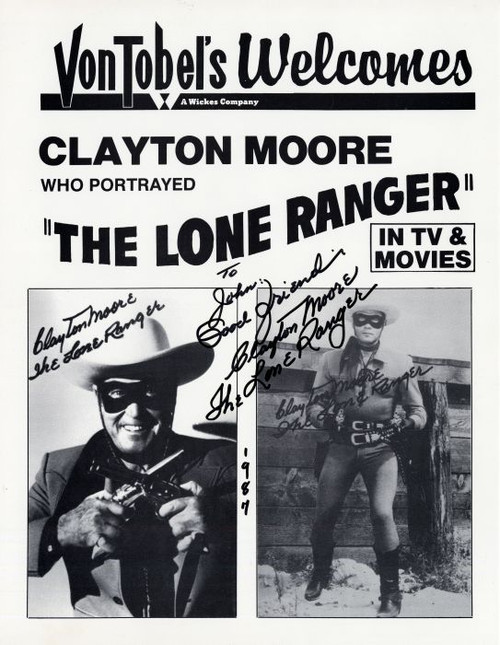 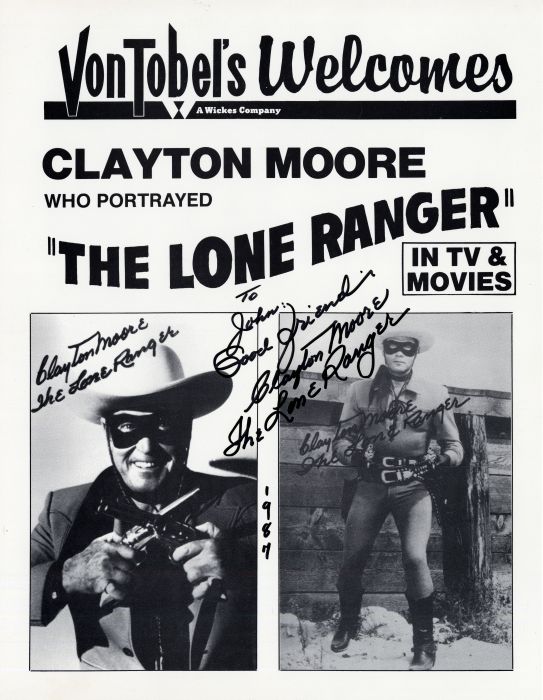 Certificate
The Lone Ranger was an early, long-running radio and television show based on characters created by George W. Trendle of Detroit, Michigan and developed by writer Fran Striker of Buffalo, New York. The basic premise is that a masked cowboy in the Old West gallops about righting injustices, usually with the aid of a clever and laconic American Indian called Tonto. Karl May's tales of Old Shatterhand and Chief Winnetou may have influenced the creation of the concept. Clayton Moore (September 14, 1914 - December 28, 1999) was an American actor best known for playing the fictional western character The Lone Ranger. Born as Jack Carlton Moore in Chicago, Illinois, Moore was a circus acrobat as a boy, then later spent time as a male model. Moving to Hollywood in the late 1930s, he began working as a stunt man and bit player between modelling jobs. According to his autobiography, around 1940, Hollywood producer named Edward Small convinced him to adopt the stage name "Clayton" Moore. He was an occasional player in western films and film serials for several years. His big break came in 1949, when he was cast in a low-budget Zorro serial. A new version of another masked Old West character, the radio staple The Lone Ranger, was being planned for the then-new medium of television, and Moore was soon cast for the role. Moore then faced the challenge of training his voice to sound like the radio version of The Lone Ranger, which had then been on the air for many years. He succeeded, and along with co-star Jay Silverheels in the role of Tonto, with Fred Foy intoning the famous introduction, "...the Lone Ranger rides again!", and continuing the tradition of using Gioacchino Rossini's William Tell Overture as its dramatic theme music, the program soon became the highest-rated program to that point on the fledgling ABC network and its first true "hit". After two successful years, which presented a new episode every week, 52 weeks a year, Moore left the role in a pay dispute and made a few more westerns and serials -- sometimes playing the villain! The public was not very accepting of his replacement, actor John Hart, and the owners of the program relented and rehired Moore at his requested salary, who stayed with the program until it ended first-run production in 1957. He and Jay Silverheels also starred in two feature-length "Lone Ranger" theatrical motion pictures. Moore thereafter retired from the motion picture industry, and became an accomplished real estate salesman. In the mid-sixties, however, during the first period of film and television nostalgia, his "Lone Ranger" episodes revived interest in him and Moore soon began to make his primary living in personal appearances as The Lone Ranger. He always expressed the highest regard for actor Jay Silverheels, who had portrayed the Ranger's sidekick Tonto on the program. In 1975 the owner of the Ranger character, Jack Wrather, obtained an order enjoining Moore from future appearances as The Lone Ranger. They anticipated making a new film version of the story, and did not want the value of the character being undercut by Moore's appearances, nor anyone to think that the by-now somewhat elderly Moore would be playing the role in the new picture. This move proved to be a public relations disaster of the first order. Moore responded by changing his costume slightly and replacing the mask with similar-looking wraparound sunglasses, and then countersued Wrather. He eventually won the suit, and was able to resume his appearances in costume, which he continued to do until shortly before his death. Some have attributed the incredible failure of Wrather's picture, finally released in 1981 as Legend of the Lone Ranger, to this move; in reality it was only one of the picture's many problems. Moore was so identified, both in his own mind and in the public mind, with the Ranger that he is the only person on the Hollywood Walk of Fame, as of 2004, to have his character's name along with his on the star, which reads, "Clayton Moore -- The Lone Ranger". He was inducted into the Stuntman's Hall of Fame in 1982 and in 1990 was inducted into the Western Performers Hall of Fame at the National Cowboy & Western Heritage Museum in Oklahoma City, Oklahoma. Moore's official date of birth is recorded as 1914 by the United States Social Security Death Index. However, according to his publicist was in June, 1914, but it is common practice for actors to shave years off of their age in order to continue to be considered for leading roles which they might otherwise be considered too old for, and many believe that the year sometimes given, 1908, is probably more accurate. Regardless, his autobiography adheres to official date of September 14, 1914, which (as he pointed out) was the 100th anniversary of The Star-Spangled Banner. In keeping with the nature of the Ranger character, Moore is probably the only person or one of very few considered to have been a famous television actor whose face is largely unknown to the public. His full face was never shown in the TV series, although occasionally he would wear a beard as a disguise, revealing the upper half of his face in the process. However, there is no shortage of photos of Moore unmasked, including many in his autobiography. Clayton Moore died in 1999 of emphysema and was buried in the Forest Lawn Memorial Park Cemetery in Glendale, California. History from Wikipedia.