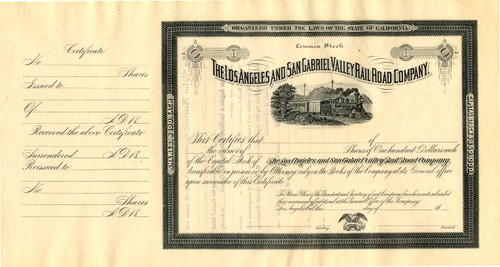 Beautiful unissued certificate from the Los Angeles and San Gabriel Valley Rail Road Company printed in 1885. This historic document has an ornate border around it with a vignette of a steam locomotive. This item is over 123 years old.

Certificate Vignette
The construction of several rail lines contributed to the rapid development of the town which was centered at what is now York Boulevard and Avenue 64. In 1885, the first rail line connecting Los Angeles and Pasadena was developed by the Los Angeles and San Gabriel Valley Railroad. It maintained a depot in Garvanza at the northwest corner of the intersection. The building stood until 1947 and was later used by the Pacific Electric depot and then as the Wells Fargo freight office. When the Pacific Electric was built by the way of South Pasadena and Garvanza, there was a waiting station on South Avenue 64, a short block from York Boulevard.