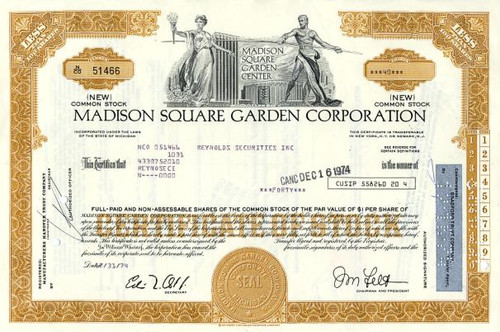 Beautifully engraved certificate from the Madison Square Garden Corporation issued in 1974 or earlier. This historic document was printed by the Security Columbian Banknote Company and has an ornate border around it with a vignette of Madison Square Garden Corporation. This item has the printed signatures of the Company's Chairman and Secretary and is over 38 years old.

Certificate Vignette
Madison Square Garden has been the name of four arenas in New York City, United States. The first two were located at Madison Square, thus the name. Subsequently a new Garden was built at 50th Street and 8th Avenue, and the current Garden is sited, on top of Pennsylvania Station at 33rd Street and 7th Avenue. The Garden is best known for the New York Knicks (basketball) and New York Rangers (ice hockey), professional sports teams that play their home matches in the arena. It is also the location of the circus when it comes to New York City, and almost any other kind of indoor activities that draw large audiences. It is also known for its place in the history of boxing. Many of boxing's most important fights were held at the Madison Square Garden, including many of Joe Louis, the Roberto Duran-Ken Buchanan affair, and the first Joe Frazier-Muhammad Ali bout. Before promoters such as Don King and Bob Arum moved boxing to Las Vegas, the Madison Square Garden was considered the Mecca of boxing. It was originally built for the sport of track cycling, which is still remembered in the name of the Madison event, which was first conducted in the Madison Square Garden. William Henry Vanderbilt officially renamed Gilmore's Garden (by which it was previously officially known, having originally been dubbed the "Monster Hippodrome" in 1866 by P.T. Barnum) to Madison Square Garden and reopened the facility to the public on May 30, 1879 at 26th Street and Madison Avenue. The second Madison Square Garden, designed by Stanford White, who would later be killed there, opened at this site in 1890 and remained until the third Garden opened in 1925. In 1960, plans were announced for a fourth Madison Square Garden Center. The new site above Pennsylvania Station was selected. Garden IV opened on February 11, 1968, with a superstar-studded Salute to the USO concert with Chicken Delight, otherwise known as Bob Hope battling former heavyweight champion Rocky Marciano. Others making guest appearances included New York City Mayor John V. Lindsay, Bing Crosby, Phyllis Diller, Pearl Bailey, Jack Dempsey, Gene Tunney and General of the Army Omar N. Bradley. As Garden IV had its opening night event, Garden III remained open during that final February weekend.