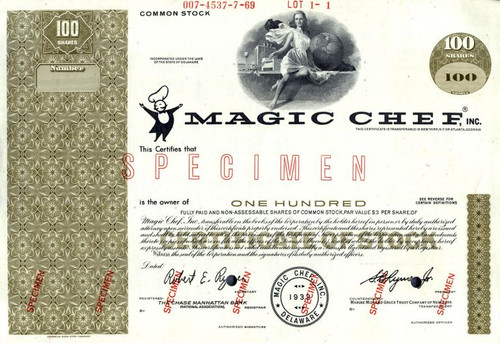 Beautifully engraved specimen certificate from the Magic Chef, Inc. printed in 1969. This historic document was printed by the American Banknote Company and has an ornate border around it with a vignette of a woman next to a globe and manufacturing facility. This item has the printed signatures of the Company's officers. 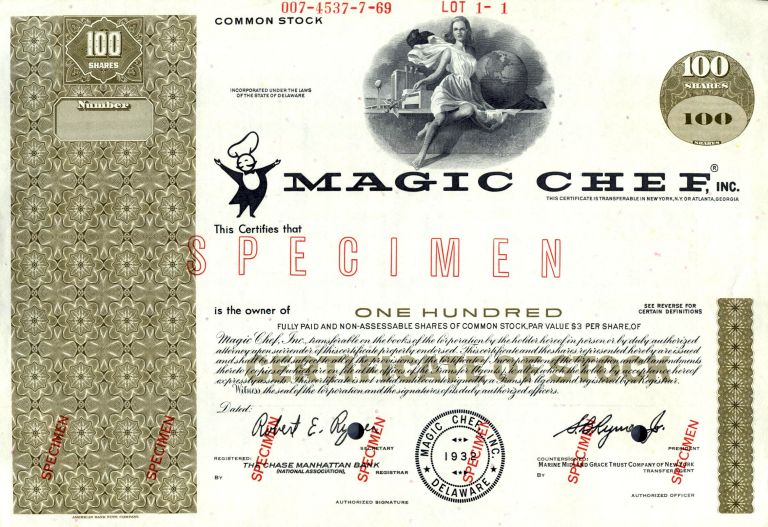 Certificate
Magic Chef, Inc. (formerly the American Stove Company) is an appliance brand currently owned by CNA International Inc. In the 1850s John Ringen, a German immigrant to the United States, began a tinshop in the major river port city of St. Louis, Missouri. His business prospered and in 1870, he took in a partner, George August Kahle, who had immigrated to America in 1867. The business sold housewares, early washing machines, and cooking stoves they called "quick meals". In 1881, George Kahle persuaded his brothers-in-law, Charles and Louis Stockstrom to set up a shop to make stoves. These four principals then organized two corporations, the Ringen Stove Company and the Quick Meal Stove Company. American Stove Company and the Magic Chef brand name Quick Meal manufactured the stoves with Ringen Stove handling the entire output of Quick Meal's production. The phenomenal growth of these two companies during the 1880s and 1890s led to the merger of eight other stove companies in St. Louis, Chicago and Cleveland in 1901 to form the American Stove Company. American Stove introduced the first oven temperature control device in 1914, and in 1929 began using the brand name Magic Chef. The Magic Chef name was so successful as an oven and stove brand that American Stove Company changed its name to Magic Chef, Inc. in 1951. The company remained well known for its gas stoves, but attempts to spread the brand to other household appliances were unsuccessful. In 1957, it was merged with the Food Giant Markets of California. In 1958, it was sold to Dixie Products, a small stove company of Cleveland, Tennessee, after selling off a few underperforming divisions of Magic Chef. By 1986, the company had become the 249th largest industrial company in the nation and it was sold to Maytag.[9] Magic Chef also made home furnaces and air conditioners and that operation was sold to Lennox International in 1988. Whirlpool Corporation acquired Maytag Corporation in 2006, however Magic Chef has been spun out to CNA International Inc./MC Appliance Corporation which imports and markets small appliances under several brand names. History from Wikipedia, Encyberpedia and OldCompany.com (old stock certificate research service) About Specimen Certificates Specimen Certificates are actual certificates that have never been issued. They were usually kept by the printers in their permanent archives as their only example of a particular certificate. Sometimes you will see a hand stamp on the certificate that says "Do not remove from file". Specimens were also used to show prospective clients different types of certificate designs that were available. Specimen certificates are usually much scarcer than issued certificates. In fact, many times they are the only way to get a certificate for a particular company because the issued certificates were redeemed and destroyed. In a few instances, Specimen certificates were made for a company but were never used because a different design was chosen by the company. These certificates are normally stamped "Specimen" or they have small holes spelling the word specimen. Most of the time they don't have a serial number, or they have a serial number of 00000.