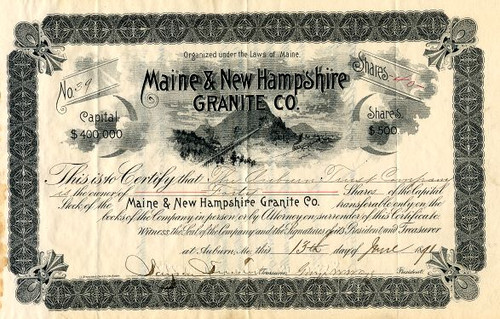 Beautiful certificate from the Maine & New Hampshire GRANITE Co issued in 1891. This historic document was printed by L.L. Brooks Bankcheck Company and has an ornate border around it with a vignette of a train traveling up a mountain range. This item has the signatures of the Company's President and Treasurer, Payson Tucker and is over 117 years old.

Certificate Vignette
Granite from the Maine & New Hampshire Granite Corporation's quarries was used in buildings and monuments in the following examples: General Grant's tomb, Riverside Drive, New York; Richard Smith Soldiers and Sailors' Memorial gateway at Fairmount Park and the Penn Mutual Life Insurance Co. building in Philadelphia, Pennsylvania; the Hahnemann monument in Washington; City Hall in Portland, Maine; the Chicago & Northwestern Railway Building and Field Annex Building in Chicago, Illinois; the Union Trust Building in South Bend, Indiana; and the Exchange National Bank Building in Tulsa, Oklahoma. Standing at the head of the most extensive and valuable granite quarries of the world, are those of the Maine & New Hampshire Granite Co. , who have office headquarters in the Baxter Building, Portland, and whose extensive building operations add fame to the Pine Tree State. At their quarries at North Jay, Maine, and Redstone, New Hampshire, the latter being situated at the base of the White Mountains, the company have a combined capacity for producing 6,000 tons of rock daily. This consists of monumental, building work, paving and crushed rock, etc. When running to their full capacity, 2,000 men are employed. The company have operated the same quarries continuously for many years, and the product comprises respectively, red, green and white granite, of a superior quality, declared unsurpassed, from its peculiar freedom from iron-rust and the blemishes common to ordinary granites. Their quarries and extensive workshops comprise one of the largest manufacturing plants in Maine, connected with which, the company provide dwelling houses, halls, stores and everything necessary to the needs of the employees and their families. The best of harmony has always existed between the company and its workmen, who are treated with every- consideration for their comfort and rights. The reputation of the concern extends all over the country, and to a great extent to Europe; and it is doubtful if residents of Portland are fully aware of the magnitude of the building operations of this company, who merely maintain large offices in this city. It may be said that although two-thirds of the force, about 1^200 men, are employed in this state, that the work of the concern is better known in New York, Chicago, Philadelphia and the larger cities of the country than here. Among the extensive buildings constructed by them from their granite, may be mentioned the following: The L. Z. Leiter Block, Chicago; Bowling Green Building, Lower Broadway, New York: The Smith Memorial, Fairmount Park, Philadelphia; Grant Monument, Riverside Park, New York; R. G. Dun Building, Lower Broadway, New York; Northern Union Station, Boston & Maine R. R., Boston, and the handsome union station in this city. A conception of the massiveness of some of these structures is gleaned, when it is stated that the Grant monument is 100 feet square, its height from base line to top of memorial being 160 feet, or nearly 300 feet from the water level of the Hudson River. The great Smith Memorial Building, now being completed by the company, contains 1,530,000 pounds of granite. The company has at this writing over $1 ,000,000 worth of work in hand. The accompanying views of the quarries and workshops, give but a limited idea of their magnitude. The massive buildings, built in the most substantial up-to-date manner, will, however, always show the best product of the granite of the states of Maine and New Hampshire, and the work of their most skilful artisans in the building line. The officers of the company are as follows: Ata Cushman, Pres. ; Payson Tucker, Treas. , and J. P. Murphy, Gen'l Supt. EVENING EXPRESS PUBLISHING COMPANY, GREATER PORTLAND, MAINE 1899