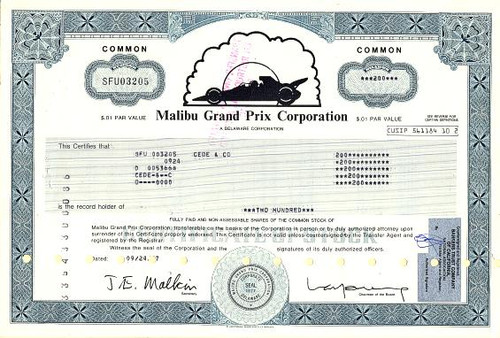 Beautifully engraved and hard to find certificate from the famous Malibu Grand Prix Company issued no later than 1985. This historic document was printed by the Jeffries Banknote Company and has an ornate border around it with a vignette of Grand Prix Car. This item has the printed signatures of the company's officers and is over 22 years old. Punched cancelled.

Certificate Vignette
From Time magazine: Le Mans for the Masses Monday, Sep. 19, 1977 Vroom! ... Aargh! ... Eeesh! ... Careening out of a 180° hairpin bend, engine screaming at 6,800 r.p.m. and rear wheels adrift, the smoking blue racing machine slides perilously close to the curve, then barrels into a straightaway. "C'mon now," the driver growls through gritted teeth. "Punch that pedal! Now feather the gas! Hug that curve like your darlin'.. . !" The driver is not Mario Andretti or even Walter Mitty. He is a thrill-seeking visitor at Northridge, outside Los Angeles, one of seven sites in California where anyone with a driver's license and a few dollars can safely savor some of the adrenaline-pumping, gut-clutching fever of Grand Prix racing--on a minitrack, in a scaled-down Formula 1 speedster. Le petit Grand Prix is already one of the hottest pastimes in California, the nation's begetter of vogues, and is spreading east. The two businessmen who laid out the first track in Malibu 29 months ago have since sold their company to Warner Communications Inc. for $4 million. Malibu Grand Prix is the name of the game, and it is not tame--though it may be less hazardous than roller-coaster riding. No mini-Mario has been killed or seriously injured in the 6 million Malibu laps to date (though one nervous driver sprained a finger on the steering wheel, and several speeders have crashed through a fence). After buying tickets ($1.25 a lap) and getting instructions on safety regulations and the operation of the car, drivers buckle into Bell helmets and safety belts to await the red, amber and green signal light at the starting line. There is no wheel-to-wheel competition: each car is electronically released, at nine-second intervals, if the track is clear. But when the light turns green and the engine revs up for the first sneaky curve, it could be Le Mans or Monte Carlo. The half-mile track is a series of tight, tough curves--carrousels, S's, hairpins and hard rights and lefts--30 in all, with only 80 meters of straightaway in the whole labyrinth. Though the car can seldom reach 40 m.p.h., to the driver, with eyes only three feet above the asphalt, the sensation, if not the speed, is supersonic. He is competing with the clock. As he crosses the finish line, his time is shown in lighted, 2-ft.-high digital figures. First time around it may be a humiliating 98.46 sec. After a few more heart-in-mouth laps, it may be 66.11. But our hero--or heroine--knows well that the record for the Northridge track is 57.15. The cars can do it if the drivers cannot. Custom-built for $15,000 apiece, they are three-quarter-size versions of the Formula 1 racer, powered by 28-h.p. Wankel rotary engines capable of 67 m.p.h. on the open road. The brightly colored Fiberglas bodies are mounted on tubular-frame chassis; spun-aluminum wheels carry oversize Goodyear racing-slick tires. They have automatic transmission and quick-ratio steering; brakes are front-wheel disc and rear-wheel drum. The cars are almost impossible to roll over. The appeal of mini-Grand Prix racing, says Malibu Vice President Dan Morris, is "total escape. It lets you get away from it all. When that green light goes on, you're not thinking about anything else." The formula appeals equally to love-troubled teen-agers and businessmen with the blahs. One Malibu regular is an 86-year-old retiree; another is a prominent psychiatrist who drives up in his own Shelby G.T. The holder of the Northridge speed record is Joe Granatelli, 23, nephew of the great Andy and son of ex-Driver Vince Granatelli. Says he: "My father asked me not to go into real racing. This way I can race safely. I'll come out here and race maybe 20, 30 laps. It relaxes me. I'm going to beat the records at all the other Malibu tracks too." In Malibu G.P., almost anyone has a chance to be a winner. In periodic "bracket" races on all the tracks, entrants are classed as A, B, C or D drivers according to their best average times (none slower than 62.00). Winners in each class get up to $100 in prizes. Inevitably, in Southern California, the sport attracts non-track stars, notably James Garner, Connie Stevens, Flip Wilson (he didn't flip), David Cassidy and sundry rockers, who to date have won no prizes. Henry ("the Fonz") Winkler went off the track on his first lap. But the best customers, the Malibu managers maintain, are the nonfamous people like the 42-year-old woman who set a track record--Alltime Slowest--on her first time out. She did the first 800-meter lap in 212 sec.--equivalent to 6½ m.p.h.--thereby qualifying for the Guinness Book of World Records as surely as any Andretti.