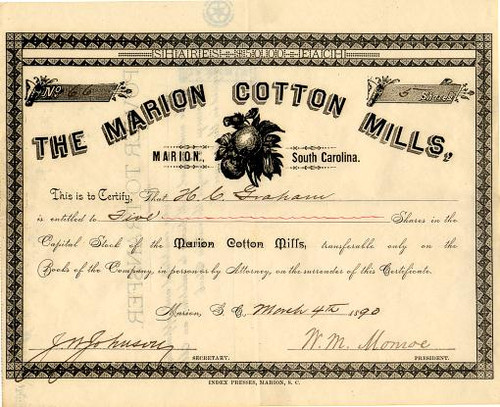 Beautifully engraved certificate from the Marion Cotton Mills issued in 1890. This historic document was printed by the Index Presses of Marion, South Carolina and has an ornate border around it with a vignette of a cotton plant. This item has the signatures of the Company's President, W. M. Monroe and Secretary, J. W. Johnson and is over 116 years old.

Certificate Vignette
On December 17, 1847, when by an act of the South Carolina legislature a charter was issued to the town, its official name was given as "Marion". In 1855, a council was elected to quide the development of the town. Horatio McClenaghan was elected the first intendant (mayor) and four wardens were chosen to serve with him. Stock-raising and the planting of cotton (which now replaced the earlier main crop, indigo) were profitable agricultural pursuits at this time. Railway transportation came to Marion; a weekly newspaper was published; landowners and trades people were faring well; and a small group of citizens began to show an interest in the cultural aspects, of the community. A period of great growth and prosperity seemed just around the corner -- destined to be cut short by the advent of the War Between the States, 1861-1865. These years found most of the able-bodied men away fighting in the war. The elderly and the women and children managed as best they could at home. The county suffered no property damage from Sherman's troops. Luckily, the northern soldiers decided against attempting to cross the rain-swollen Great Peedee River. A correspondent of The Nation, who was sent south to describe conditions in 1865, gives this pleasant picture of Marion: "It is a very pretty little village full of trees and gardens and light, elegant houses." It was not until the late 1870's and early 1880's that the community emerged from the setback of the war and the reconstruction period. The years that followed, through the early part of the 1900's, probably covered the most significant era in the history of Marion, for it was then that the lasting character of the town began to emerge. W.W. Sellers in his History of Marion County (1902) comments on the commercial activity: "The improvements since 1876 have been gradual, up to a few years back, when a new impetus was given her, and she is now on a boom; her population is about 2,000. Instead of bar-rooms, we have two flourishing banks, a cotton factory, an oil mill, an iron foundry and machine shops, the largest and best in the eastern part of the State; two large tobacco warehouses, with pack houses, and a stemmery of tobacco; and this is not all, the old wooden shanties for dwellings and stores are being replaced by large and commodious buildings for dwellings - some of wood and some of brick have gone up and are going up; also the same as to stores, and other buildings; there are also five or six livery stables and five or six drug stores, and from two or three places of business, stores, in 1840, small establish merits, they now number at least thirty, with large stocks of goods and of every variety, and every one seems to be busy and doing a fair business." Many of these "large and commodious" dwellings and stores are very much in evidence in Marion today, still serving families and businesses with grace and dignity. Attractive churches were built by the Methodist, Presbyterian, Baptist and Episcopal denominations. The Marion Academy was constructed in 1886, the crowning accomplishment of several previous academy societies, and the Marion Public Library was organized in 1898, the result of a movement begun much earlier. The Opera House (1892) brought theatrical and musical productions to the residents. Literary societies encouraged the citizenry to improve their minds. A strong sense of community developed, most clearly exemplified in the Civic Improvement League which chose city beautification and school improvement as its main areas of concern. History from Wikipedia.