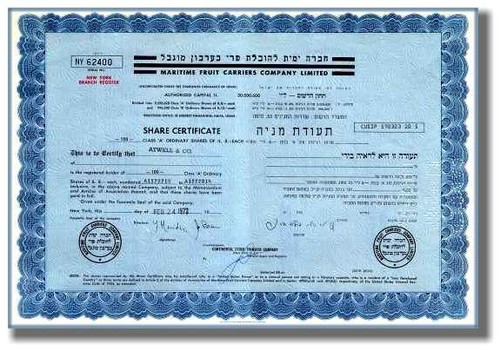 Beautifully engraved certificate from the Maritime Fruit Carriers Company Limited issued in 1972. This historic document was printed by the Security-Columbian Banknote Company and has an ornate border around it. This item has the printed signatures of the company's officers and is over 29 years old. Maritime Fruit Carriers Company was a large merchant marine operation owned by the Israeli Governmant. As a result of Israel's geopolitical situation, almost 99 percent of its trade is transported by ship. Thus, in the first twenty years of statehood, the government made a special effort to build a commercial fleet. In 1985 about 9,205 tons of freight were unloaded at Israeli ports: 55 percent at Haifa, 39.3 percent at Ashdod, and 5.7 percent at Elat. During the same year, 7,088 tons were loaded: 22 percent in Haifa, 68.7 percent at Ashdod, and 9.3 percent at Elat. In the 1970s, two additional, specialized ports were opened: an oil terminal at Ashqelon and a coal terminal at Hadera. These open-sea, offshore ports were operated by special port administrations independent of the Israel Ports Authority. The merchant fleet was 3,050,000 deadweight tons in 1984. The main shipping companies were (in order of importance) Zim, El Yam, Dizengoff, and Maritime Fruit Carriers. During the late 1960s, two structural and technological changes took place in the shipping industry. First, improved cargo-handling technologies and containerization led to the use of more specialized ships. Second, ships increased in size, especially bulk carriers and tankers. Despite these changes--and the importance placed on sea transportation--Zim (owned by the government, the Histadrut, and the Israel Corporation) and El Yam continued to sell unprofitable old ships in the hope of becoming profitable. In 1988, the government merged Israel Railways into the Ports Authority, hence creating the Israel Ports and Railway Authority (PRA). PRA is responsible for planning, developing, managing, maintaining, and operating Israel's seaports in Haifa, Ashdod and Eilat, as well as Israel Railways. Currently, the ports employ 2392 employees. The merchant marine fleet consists of 23 ships (1,000 GRT or over) which total 736, 419 GRT and include 1 cargo ship, 21 container, and 1 roll-on/roll-off cargo vessels.