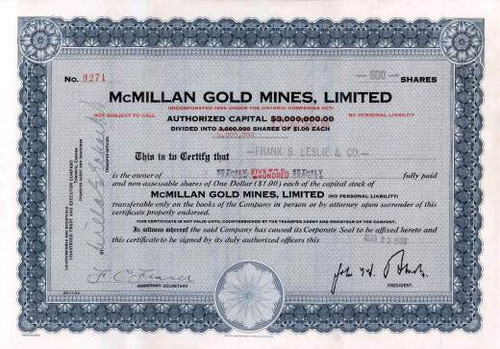 Beautifully engraved certificate from the McMillan Gold Mines, Limited issued in 1934 - 1936. This historic document was printed by the British American Banknote Company and has an ornate border around it. This item is hand signed by the Company's President and Secretary and is over 67 years old. McMillan Property The property is in the Sudbury Mining Division, Ontario and is located about 12 km. south of the town of Espanola, Ontario and about 75 km. southwest of Sudbury, Ontario. The claims are underlain by the Gowganda Formation and the Lorrain Formation of the Huronian Supergroup. The Gowganda Formation hosts most of the gold deposits in the region. The McMillan Mine was first explored in the early 1920's with development taking place through the 1920's and 1930's culminating in the production of 60,139 tons from which 10,593 ounces of gold were obtained for a recovered grade of 0.18 ounces gold per ton. The property was developed with a shaft and seven levels to 875 feet. All levels intersected gold ore. The mine was shut down in 1937 due to a lack of funds to operate and a lack of ore reserves to get funding. The shaft was dewatered and the underground sampled in 1985 and 86. Gold mineralization still exists in the underground workings and the work done suggests areas to be tested by diamond drilling. The McMillan Mine was one of two mines located on House Lake, also known as Moyle Lake. The Majestic Mine, incorporated in 1921, was located less than a mile from the AER on the north shore of the lake. By 1929 a shaft had been sunk to about 200 feet, but by the mid thirties all operations had ceased. Of note, the siding at Mile 61.1, identified by the AER, in 1929 as the McMillan Siding is shown in the 1929 Annual Report of the Ontario Department of Mines as the Majestic Siding. The McMillan Mine was incorporated on December 31, 1926 with its Head Office in Sudbury. Among the board of directors were Sudbury residents, J.G. Henry, G.A. Foote and Ewan J. McMillan. Presumably the mine was named after this latter individual who was also the mine superintendent. In 1928, Joseph Errington was listed as a director. Mr. Errington was later involved both Ventures Limited, the parent, of Falconbridge Limited and the iron ore discoveries in the Steep Rock area. The mine site was located, on the north shore of House Lake about 1.7 miles west of the AER's "Majestic Siding." A wagon road connected the mine to the railroad. In 1927, a 550 foot sunk. Development continued in 1928 on the 325 and 525 levels. By 1928, surface facilities included a 150 hp boiler, hoist house and headframe, offices bunkhouses and a manager's residence. Underground workings consisted of over 2400 feet of. drifts and crosscuts. Independent examinations of ore samples unfortunately, indicated an assay of only about $7.50 per ton, far less than required for profitable mining and operations were suspended in 1929. By 1933, new capital found and operations resumed. By the end of 1935 over fifty, thousand tons of ore had been processed by the 150 ton per day concentrator built on site in 1934. Eighty two men worked at the site which now boasted two additional levels at 750 and 875 feet.,As in 1929, however, low assay results doomed the operation and in 1937, the mine was shut down and the mill, hoist and the compressors were sold. The site would, remain dormant until the mid-eighties. History from AER Heritage Group and other sources.