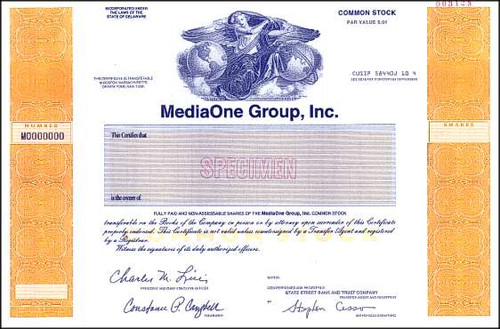 Beautifully engraved specimen Certificate from the Media-One Group . This historic document was printed by the American Banknote Company and has an ornate border with a vignette of a woman holding wires around two globes. . This item has the printed signatures of the company's officers including Charles Lillis as President and CEO. This is the first time we have had this certificate for sale. 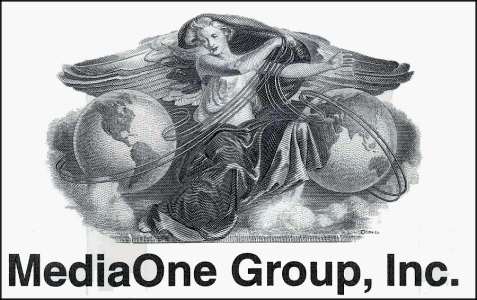 Certificate Vignette
AT&T acquired the Media-One Group for $62.5 billion. They were the nation's fourth largest cable company. The deal gave AT&T ownership of all or part of the cables reaching into 60 percent of American homes. Through its ownership of Liberty Media, AT&T is an owner of MacNeil-Lehrer Productions, the co-producer of this program. As as result of that deal, Microsoft announced it was investing $5 billion in AT&T, a move that gave the software manufacturer a strong position in the market for operating systems used in set-top boxes for cable television. Charles Lillis was serving as president and CEO of US West Media Group in 1998 when it split from US West and became MediaOne Group. As chairman and CEO of MediaOne, Lillis is responsible for one of the world's largest broadband communications companies. ("Broadband" refers to the technology of using high capacity cable-TV lines to deliver digital services such as interactive video, Web-enhanced television and high-speed data, and Internet and telephone services.) From his base in the Denver suburb of Englewood, Colorado, Lillis oversaw domestic and international cable as well as telephone communications, international wireless and interactive multimedia services. MediaOne employed 16,000 people, operated in ten countries and generated more than $7 billion in annual revenues. Known as a sharp deal-maker, Lillis made the deal of a lifetime when AT&T agreed to acquire Media-One Group for $62.5 billion, an increase of $50 billion in value since the spin-off from US West.