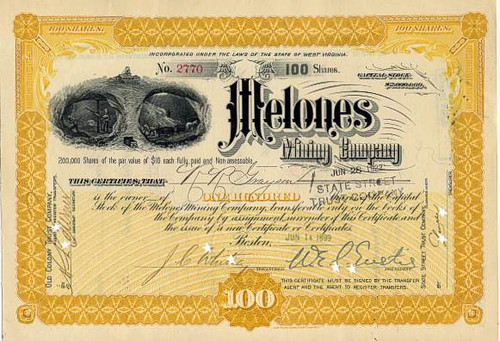 Beautifully engraved certificate from the Melones Mining Company issued in 1899. This historic document was printed by New York Bank Note Company and has an ornate border around it with a vignette of men working underground in a mine. This item is hand signed by the Company's President ( W. E. Eustis ) and Treasurer ( J. C. Whitney )and is over 105 years old. 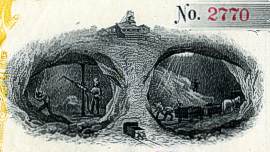 Certificate Vignette
The property had 16 claims, 152 acres on Carson Hill. Melones was originally known as Robinsons Ferry; however, named after John W. Robinson who, with his partner Stephen Meade, established a ferry in the autumn of 1848. The operation proved to be quite a gold mine. During 1849, when the rush to the mines was at its peak, the ferry collected $10,000 in a six-week period. A touring circus once found it necessary to cross here in order to perform at nearby Columbia. The owners of the ferry refused to carry old Lucy, the show's one elephant, who was forced to swim across the swift current. Sadly, Lucy was carried away and drowned, whereupon the circus disbanded and commenced to mining. Robinsons Ferry was renamed "Melones" by the Melones Mining Company, around 1902.