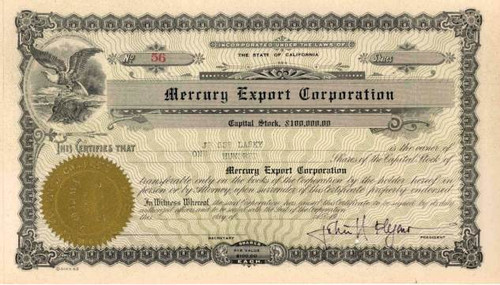 Beautifully engraved certificate from the Mercury Export Corporation issued in 1919. This historic document has an ornate border around it with a vignette of an eagle with a gold embossed seal that says "Aviation Securities Company" and another embossed seal over the signature that says " Cecil B. DeMille Productions California 1922". This item is hand signed by the Company's President ( John H. Flynt ?) and is over 84 years old. The certificate was issued to Jesse Lasky. This company appears to be related to the Cecil B. DeMille's Mercury Aviation Company. 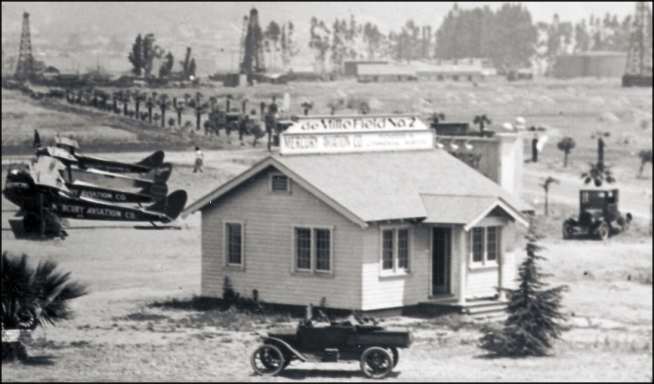 Cecil B. DeMille's Mercury Aviation Offices at Roger's Airport in Los Anagles
Cecil B. DeMille founded the Mercury Aviation Company ( aka Mercury Air Lines ) in 1919 which was one of the first American airlines to carry air freight and passengers commercially on regularly scheduled runs. This company was one of the world's first ( if not the first ) scheduled airline with multiple destinations (5 months before Dutch KLM inauguration). the company flew Junkers-Larsen JL-6 and had scheduled flights to to Santa Catalina Island, San Diego, and San Francisco. Over 25,000 passengers flew Mercury as transportation, charter, and sightseeing flights during their two-years of operations. Then never had one injury. In August of 1920, Mercury Aviation bought its first factory new plane (JL-6) from Junkers, and it was delivered by famed WWI ace, Eddie Rickenbacker to DeMille Field #2. In May 1921 that plane flew its first scheduled flight for Mercury from L.A. to San Diego. The public was not yet ready to embrace the idea of using aircraft for serious traveling and his airline never became a viable business. Mercury Air Lines 1919: Cecil B DeMille dba Mercury Aviation Co and Mercury Air Lines, DeMille Field, West Los Angeles CA. 1921: Discontinued operations, sold assets to Rogers Airport Corp. · Likely the world's first scheduled airline with multiple destinations (5 months before Dutch KLM inauguration), used Junkers-Larsen JL-6. Routes to Santa Catalina Island, San Diego, and San Francisco. · More than 25,000 passengers carried in transport, charter, and sightseeing flights during two-year operation without a single injury. Cecil B. DeMille (1881-1959) was also a Director and Producer. He directed two versions of the Ten Commandments (1923, 1956); did the voice of God in the second one Filmed the movie The Squaw Man, three times (1913, 18, 31) Directed Samson and Delilah, Reap the Wild Wind, Cleopatra, Crusades, North West Mounted Police and Adam's Rib One of 36 founders of the Academy of Motion Picture Arts and Sciences He designed the famous Brown Derby restaurant (1929)