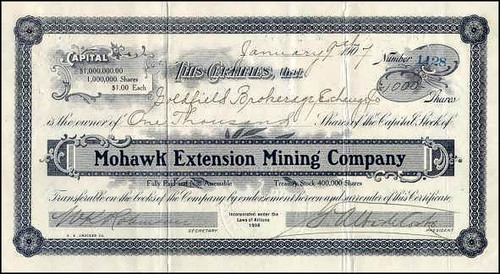 Beautifully engraved Certificate from the famous Mohawk Extension Mining Company issued in 1907. This historic document was printed by the H.S. Crocker Company and has an ornate border around it. This item is hand signed by the company's president ( F. Albert Costa ) and secretary ( W. K. Robinson ) and is over 93 years old. Goldfield, located in Esmeralda County, Nevada began as a mining camp in May 1903 with a population of less than a dozen. In about six years it grew to around 15,000 as a result of several large strikes. The district produced a tremendous amount of ore. George Wingfield was among those to gain prominence in Goldfield. The community's boom was short-lived. The town still exists, but is a shadow of its former self. By 1904 Goldfield began shipping rich ore, and soon brick and stone buildings were built. A railroad connected Goldfield and Tonopah to the main lines, and operated until 1947. A few of these historic buildings still stand as reminders of Goldfield's boom years. Mining peaked in 1910, with over $10 million being produced by the Goldfield Consolidated Mining Company. By 1918 major mining had ceased, although in the 1980s open-pit operations developed near-surface veins and microscopic gold and leached dump material.