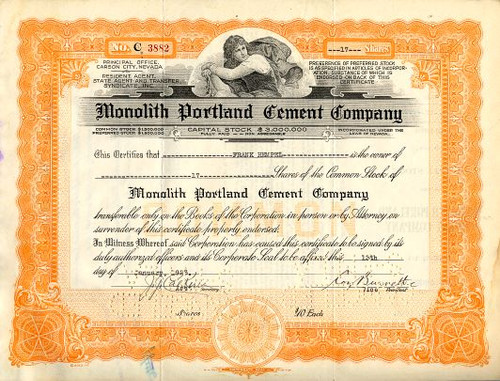 Beautiful certificate from the Monolith Portland Cement Company issued in 1923. This historic document was printed by Goes Banknote Company and has an ornate border around it with a vignette of a woman. This item has the signatures of the Company's President and Secretary and is over 85 years old. 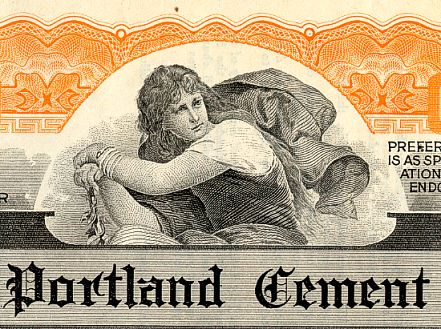 Certificate Vignette
The story of Monolith Portland Cement begins around the turn of the century when the Los Angeles Board of Public Works set out to supplement its water supply from beyond the Los Angeles basin. By 1906 the City had secured a deed to water from the Owens Valley on the eastern side of the Sierras and begun development of a facility to convey the water to L.A. The construction of a cement plant at Monolith, California was one of the first aspects of the project undertajken by the City. Why Monolith? In addition to its plentiful supply of limestone and clay (needed to make the high-grade cement to be used to construct the aqueducts to carry the water), Monolith was also situated near the geographic center of the proposed transmission site. The plant was finished in 1908 and operated continuously until 1914, when the L.A. water project was completed and the mill shut down. In 1920 the property was leased to a partnership called the U.S. Potash Company. In Iune 1921 it was renamed the Monolith Portland Cement Company. For the next half-century Monolith Portland Cement met the demands of a booming Los Angeles and the rapidly swelling contours of southern California. The architecture of the region still bears traces of the company's goods. Many of the Spanish style homes and businesses in Beverly Hills and Hollywood (built in the '20s) utilised Monolith stucco; the L.A. County Hospital -- a monument to the city -- was constructed from Monolith cements. In 1941, at the onset of WW II, the U.S. government laid claim to Monolith Portland Cement's raw materials and built the enormous U.S. Naval Ammunition Dump in Hawthorne, Nevada. From 1942 till the end of the war much of the company's output went into construction of a naval base on Guam Island. In the '50s and '60s, Monolith Portland Cement expanded and modernized its facilities, fulfilling southern California's ever-growing highway, utility and building needs. Early in its history the owners of the company had erected a small tract of modest homes for its employees, and a general store-cum-post office to serve the tiny community. But in 1972, as a way to reduce their maintenance costs, Portland Cement shut down the town and razed the houses. In the early '80s, the Calavaris Cement Company purchased the property and replaced the original factory (exhausted and worn out by this time) with the ultra modern facility that operates in its place today. In its 51 years Monolith Portland Cement produced more than 110 million barrels of cement -- enough to build a two-lane highway around the world. And the drama of its once-glimpsed glory inspired American Primitive guitarist, John Fahey, to compose a song in its honour. Fahey's guitar instrumental named for the factory first appeared on his 1967 album, Days Have Gone By. From Elijah P. Lovejoys liner notes for that album: "Composed by Fahey in late 1962 or early 1963 after driving from Albuquerque to Berkeley. Fahey was impressed by the contrast between this enormous edifice, the smoke which poured from it and the surrounding green hillsides. Upon arriving in Berkeley he took a bath, had Pat over for dinner and composed it in her presence later in the evening." History from Wikipedia and OldCompanyResearch.com (old stock certificate research service).