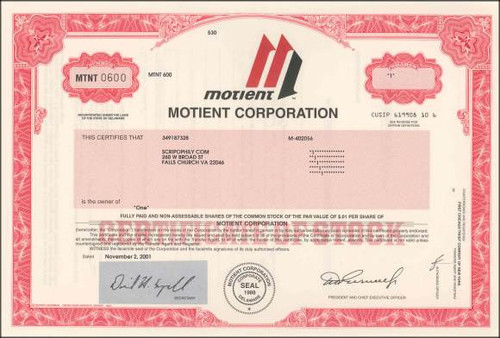 Beautifully engraved certificate from the Motient Corporation. This historic document was printed by the American Banknote Company and has an ornate border around it with a vignette of the company's logo. This item has the printed signatures of the Company's President and Secretary. 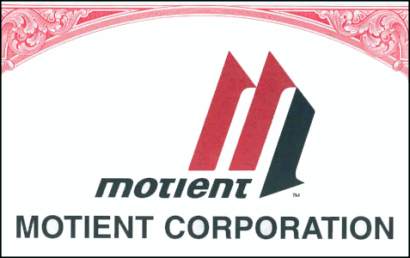 Certificate Vignette
Motient Corporation was founded in 1988 as American Mobile Satellite Corporation. Its acquisition of ARDIS was completed on March 31, 1998. In April 2000, the company changed its name to Motient, with its stock traded on the NASDAQ National Market under the symbol "MTNT". Motient combines its GEO (geosynchronous earth orbit) satellite above with its terrestrial network of more than 2,100 base stations below to provide two-way wireless mobile data, Internet, and voice services covering all 50 states, Puerto Rico, the US Virgin Islands, and US coastal waters. Wireless offerings include e-mail (eLink), messaging, telemetry, and other data services, as well as satellite voice and dispatch services. The company plans to expand by buying Rare Medium, which offers Web hosting and other Internet-related services. Motient spun off its XM Satellite Radio unit. Motient Announces Prenegotiated Restructuring Plan to Eliminate $335 Million in Debt and Convert to Equity January 10, 2002 - Motient Press Release RESTON, Va., Jan. 10 /PRNewswire/ -- Motient Corporation (Nasdaq: MTNT - news), owner and operator of the nation's largest wireless data network, today announced that holders of a majority of Motient's senior notes have agreed in principle to the terms of a debt restructuring that will convert Motient's senior notes to equity. The restructuring is subject to court approval and other customary conditions. If the restructuring is completed as proposed, Motient will eliminate more than $40 million in annual interest payments, which Motient expects will enable it to reach EBITDA break even in 2002, and to have sufficient cash to operate beyond its expected cash positive date. "This restructuring allows Motient to proactively eliminate substantially all of its debt and to significantly improve our ability to achieve EBITDA break even later this year," said Walter V. Purnell, Jr., president and CEO of Motient. "Even more significant, the restructuring will not affect the operations of our nationwide wireless data network, our customers or our employees. For Motient's 250,000+ subscribers, it is business as usual. We are hopeful that the restructuring results in a dramatically stronger Motient Corporation." Holders representing over 50 percent of the principal value of the senior notes have agreed in principle to vote in favor of the proposed restructuring, under which the senior noteholders will exchange their notes for new Motient stock. Under the proposed restructuring plan, existing common shareholders will receive warrants with a nominal strike price to purchase 5 percent of the new common stock in the reorganized company. The warrants will be exercisable once the senior note holders have recovered 105 percent of the face amount of their investment. The current equity holders would therefore be able to participate in the upside potential of the core business as well as in any potential appreciation due to Motient's carried interest in MSV. The plan of reorganization will require court approval. Motient has filed a voluntary petition for reorganization under Chapter 11 in the Eastern District of Virginia. Because Motient has obtained the support of its senior noteholders, who hold a substantial majority of Motient's existing debt, Motient expects that the process of completing its debt restructuring will be comparatively simple and of relatively limited duration. Motient hopes to emerge from the restructuring by the spring of 2002. During the restructuring process, Motient expects to continue to deliver uninterrupted service on its nationwide wireless data network and to conduct day-to-day business operations while supporting its employees, its over 250,000 subscribers, and its business partners. About Motient Motient ( http://www.motient.com ) owns and operates the nation's largest two-way wireless packet data network -- the MotientTM network -- and provides a wide-range of mobile and Internet communications services principally to business-to-business customers and enterprises. The company provides eLinkSM and BlackBerryTM by Motient two-way wireless email services. Motient's wireless email services operate on the RIM 850 and RIM 857 Wireless HandheldsTM and Motient's MobileModem for the PalmTM V series handhelds. Motient serves a variety of markets including mobile professionals, telemetry, transportation and field service, offering coverage to all 50 states, Puerto Rico and the U.S. Virgin Islands. eLink is a service mark and Motient is a trademark of Motient Corporation. The BlackBerry and RIM families of related marks, images and symbols are the exclusive properties of, and trademarks of Research In Motion Limited and are used by permission. "BlackBerry by Motient" -- used by permission. Palm V is a trademark of Palm, Inc. This news release contains certain forward looking statements, including statements regarding the terms, timing and completion of the proposed restructuring, the support of the holders of Motient's Senior Notes, Motient's continuing operations and business, and Motient's future financial performance and condition. Factors that could cause actual results to differ materially from those in the forward looking statements in this news release include uncertainties associated with the restructuring process, which may include objections from creditors who have not agreed to vote in favor of the proposed plan of reorganization, unanticipated claims by other creditors, and disruptions to Motient's business relationships during the restructuring process. Other factors are described in Motient Corporation's registration statement on Form S-4 (File No. 333-63826) and in Motient's annual report on Form 10-K for the year ended December 31, 2000 and its other periodic filings and reports with the Securities and Exchange Commission. Copies of such reports and filings are available upon request from Motient's Investor Relations Department.