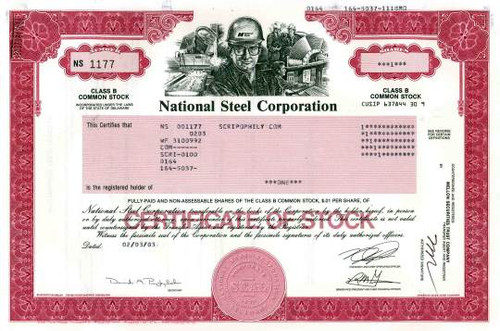 Beautifully engraved certificate from the National Steel Corporation. This historic document was printed by the American Banknote Company and has an ornate border around it with a vignette of company employees. This item has the printed signatures of the Company's President and Chief Executive Officer and Senior Vice President and Chief Financial Officer. 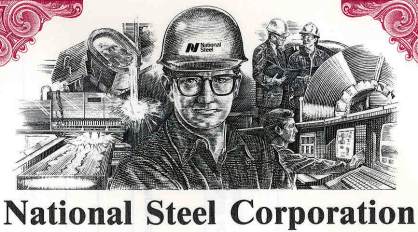 Certificate Vignette
Headquartered in Mishawaka, Indiana, National Steel Corporation is one of the nation's largest producers of carbon flat-rolled steel products, with annual shipments of approximately six million tons. National Steel employs approximately 8,400 employees. Press Release - January 30, 2003 National Steel Corp. Announces Asset Sale Agreement with AK Steel Transaction Valued at $1.125 Billion Mishawaka, Ind. January 30, 2003 National Steel Corporation today announced it has signed an Asset Purchase Agreement ("APA") with AK Steel Corporation ("AK Steel") for the sale of substantially all of National Steel's principal steelmaking and finishing assets, as well as National Steel Pellet Company, National Steel's iron ore pellet operations in Keewatin, Minnesota. The transaction, which is targeted for completion early in the second quarter of 2003, is valued at approximately $1.125 billion, consisting of $925 million of cash and the assumption of certain liabilities approximating $200 million. National Steel previously announced on January 9, 2003 that it had signed an asset purchase agreement with United States Steel Corporation for the sale of substantially all of National Steel's principal steelmaking and finishing assets. That agreement was valued at approximately $950 million, primarily consisting of cash but including up to $100 million of U. S. Steel common stock and the assumption of certain liabilities approximating $200 million, but did not include National Steel Pellet Company. As previously announced, on January 23, 2003 AK Steel submitted a proposal for the purchase of substantially all of National Steel's principal steelmaking and finishing assets for $1.025 billion, consisting of $825 million in cash and the assumption of certain liabilities approximating $200 million. National Steel also announced today that the Bankruptcy Court for the Northern District of Illinois overseeing National Steel's pending Chapter 11 cases has scheduled a hearing for February 6, 2003 to consider the approval of bidding procedures granting AK Steel priority "stalking horse" status. National Steel Chairman and Chief Executive Officer Mineo Shimura stated that, "We are pleased that AK Steel has recognized an increased value for our business. In addition, the acquisition of our iron ore pellet operations by AK Steel not only provides added value to our stakeholders, but also provides a positive solution for the customers, vendors and employees related to those operations." He noted that during the sale process, operations are not expected to change, and National Steel will continue to fulfill its obligations to its customers, suppliers and others without interruption. "Going forward, our customer relationships and the quality of our products and service will remain key priorities," Mr. Shimura stated. Under the terms of the APA, which is subject to the approval of the Bankruptcy Court, in addition to the assets of National Steel Pellet Company, AK Steel would acquire facilities at National Steel's two integrated steel plants, Great Lakes in Ecorse and River Rouge, Michigan, and the Granite City Division in Granite City, Illinois, the Midwest finishing facility in Portage, Indiana, the administrative office in Mishawaka, Indiana, various subsidiaries and National Steel's share of the Double G joint venture in Jackson, Mississippi, as well as net working capital related to the acquired assets. The transaction is subject to a number of conditions, including termination or expiration of the waiting period under the Hart-Scott-Rodino Antitrust Improvements Act and the execution and ratification of a new collective bargaining agreement by the United Steelworkers of America satisfactory to AK Steel for the National Steel employees who will become employees of AK Steel. The APA is subject to higher and better offers submitted in accordance with the procedures approved by the Bankruptcy Court under Sections 363 and 365 of the U.S. Bankruptcy Code. National Steel will continue to develop plans to emerge from Chapter 11 bankruptcy as a stand-alone entity. "While we believe that the sale to AK Steel will be successful, the contingencies that must be satisfied require that we continue to make plans toward emerging from Chapter 11 on a stand-alone basis," said Mr. Shimura. "We continue to see support from our customers, vendors, and stakeholders. This along with our excellent workforce will help us successfully emerge from Chapter 11," he continued. National Steel filed its voluntary petition in the U.S. Bankruptcy Court for the Northern District of Illinois in Chicago on March 6, 2002. Lazard Freres is acting as the investment banker to National Steel.