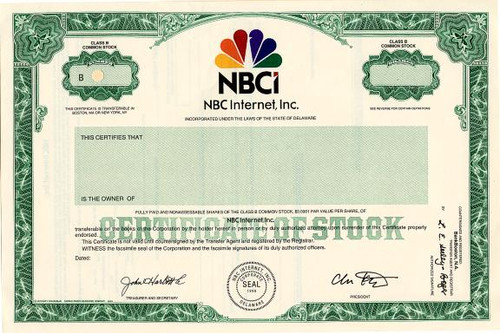 Beautiful engraved RARE specimen certificate from the NBC Internet, Inc. . This historic document was printed by United States Banknote Company and has an ornate border around it with a vignette of the NBC company logo. This item has the printed signatures of the Company's President, Chris Kitze and Secretary. 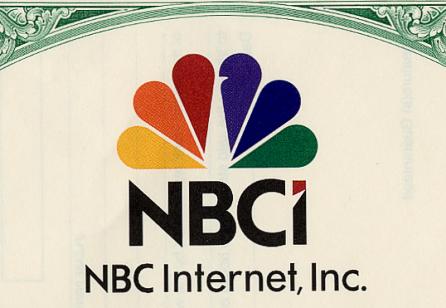 Certificate Vignette
NBC Internet, Inc. (NBCi), a branded global integrated media company, commenced operations in November 1999. NBCi integrates major media platforms, including Internet, broadcast and cable television and radio, to deliver powerful ways for partners to connect with users and customers. NBCi's flagship mass media consumer Web site, Snap (http://www.snap.com), provides a comprehensive online experience to users worldwide via Internet search and directory, community, shopping, e-commerce, multimedia and entertainment services across all bandwidths. In February 2000, NBCi launched NBCi.com, a multimedia portal for broadband and high-speed users. NBCi was created through the combination of Snap, XOOM.com, NBC.com, NBC Interactive Neighborhood, VideoSeeker and a 10 percent equity stake in CNBC.com. NBC Internet publicly trades under the ticker NBCI on The Nasdaq Stock Market (R). NBC, a subsidiary of General Electric Company (NYSE: GE), holds a 43.9 percent ownership stake in NBCi and brings to the venture the storied heritage of 70 years of branded media and technology innovations. NBCi is headquartered in San Francisco and has offices in New York City, Los Angeles, Chicago and Paris, France. About Specimens Specimen Certificates are actual certificates that have never been issued. They were usually kept by the printers in their permanent archives as their only example of a particular certificate. Sometimes you will see a hand stamp on the certificate that says "Do not remove from file". Specimens were also used to show prospective clients different types of certificate designs that were available. Specimen certificates are usually much scarcer than issued certificates. In fact, many times they are the only way to get a certificate for a particular company because the issued certificates were redeemed and destroyed. In a few instances, Specimen certificates we made for a company but were never used because a different design was chosen by the company. These certificates are normally stamped "Specimen" or they have small holes spelling the word specimen. Most of the time they don't have a serial number, or they have a serial number of 00000. This is an exciting sector of the hobby that grown in popularity over the past several years.