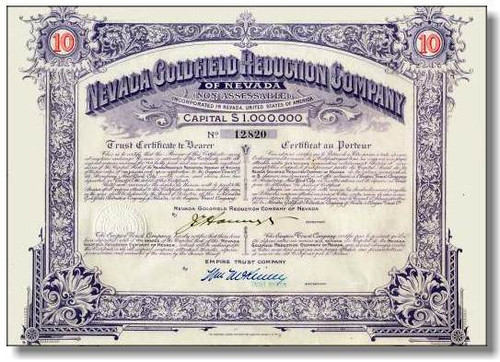 Beautifully engraved Certificate from the famous Nevada Goldfield Reduction Company issued in 1910. This historic document has an fancy ornate border around it with a vignette of the company's name. This item is hand signed and is over 93 years old. There sever rows of unsued coupons attached to the bottom of this document, that are not shown in the scan. GOLDFIELD, NEVADA For a 20-year period prior to 1900 the mining in Nevada fell into a slump that cast the entire state into a bleak depression and caused the loss of one-third of the population. Goldfield, located in Esmeralda County, Nevada began as a mining camp in May 1903 with a population of less than a dozen. In about six years it grew to around 15,000 - 20,000 as a result of several large strikes. The district produced a tremendous amount of ore. George Wingfield was among those to gain prominence in Goldfield. The community's boom was short-lived. The town still exists, but is a shadow of its former self. The city had a railroad that connected into Las Vegas . Between 1903- 40 a total of $86,765,044 in metals was produced here.