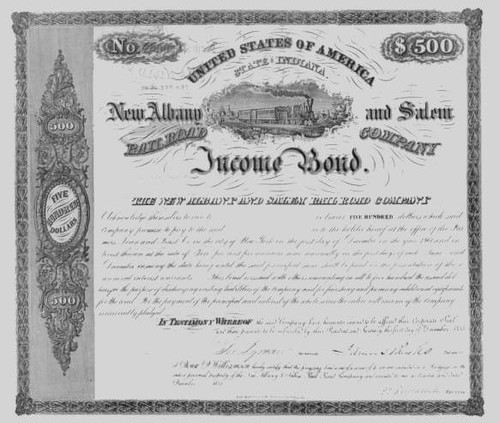 Beautifully engraved RARE certificate from the New Albany and Salem Income Bond issued in 1855. This historic document has an ornate border around it with a vignette of a train. This item is hand signed by the Company's President and Secretary and is over 147 years old. In 1847, Salem businessmen, anxious to develop a way of shipping goods between Salem and the Ohio River, joined with New Albany businessmen in organizing the New Albany and Salem Rail Road. This road was one of the pioneer lines of the midwest. In 1859 the line was reorganized as the Louisville, New Albany and Chicago Railroad. The line developed into a distinctive x-shaped pattern across Indiana. In 1897 it reorganized again as the Chicago, Indianapolis and Louisville Railway Company. The line changed its name to Monon in 1956. In 1902 the Louisville and Nashville acquired a controlling portion of the line's stock and finally absorbed the line in 1971.