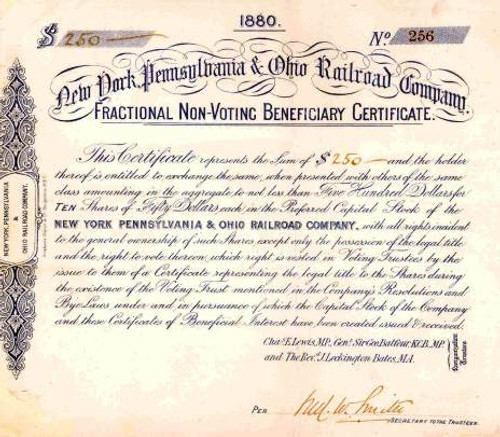 Beautifully engraved certificate from the New York, Pennsylvania & Ohio Railroad Company issued in 1880. This historic document is hand signed by the Company's Secretary to the Trustees and is over 122 years old. In March 1880, the New York, Pennsylvania and Ohio Railroad, or NYPANO, was organized from the bankrupt Atlantic & Great Western Railroad. The road was owned by five English investors in the A&GW and J. H. Devereaux, former president of the A&GW, was elected president of the new company. Devereaux was succeeded by Jarvis M. Adams who, on March 6, 1883, leased the NYPANO to the Erie Railroad. On February 24, 1896 the NYPANO was sold under foreclosure to representatives of the Erie.