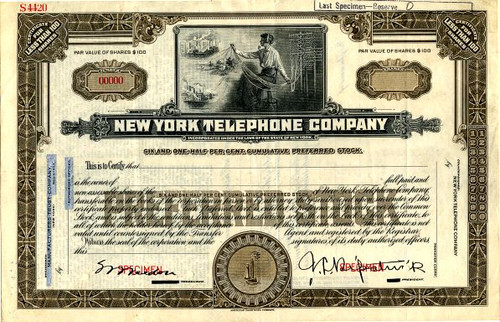 Beautiful engraved specimen certificate from the New York Telephone Company . This historic document was printed by American Bank Note Company and has an ornate border around it with a vignette of a telephone switchboard operator holding telephone lines over cities. This item has the printed signatures of the Company's President and Secretary and is over 86 years old. 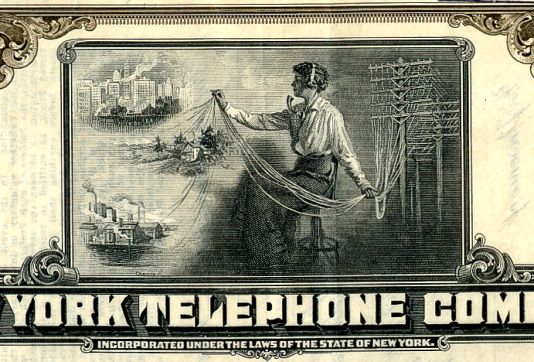 Certificate Vignette
The New York Telephone Company (NYTel) was organized in 1896, taking over the New York City operations of the American Bell Telephone Company. The Telephone Company of New York was formed under franchise in 1876 to rent telephone instruments to users, who were expected to provide wires to connect them, for example from factory to office. Such connections already existed for private telegraphs, and the new invention promised to save the cost of hiring a private telegraph operator. Manufacturers of steel wire for the Brooklyn Bridge then under construction were especially prominent among the customers under this scheme, using their own product. Western Union subsidiaries, including Atlantic & Pacific Telegraph, Gold and Stock Telegraph, and American Speaking Telephone, based their New York and San Francisco operations on the telephone exchange principle and thus were larger and more advanced than the local Bell operations. Under the November 1879 settlement of the Elisha Gray patent infringement lawsuit, Western Union handed over its telephone operations to National Bell Telephone, which then renamed itself American Bell Telephone. The merged local company was called the Metropolitan Telephone Company and in 1896 the New York Telephone Company. American Telephone and Telegraph (AT&T) eventually acquired a controlling interest. About Specimens Specimen Certificates are actual certificates that have never been issued. They were usually kept by the printers in their permanent archives as their only example of a particular certificate. Sometimes you will see a hand stamp on the certificate that says "Do not remove from file". Specimens were also used to show prospective clients different types of certificate designs that were available. Specimen certificates are usually much scarcer than issued certificates. In fact, many times they are the only way to get a certificate for a particular company because the issued certificates were redeemed and destroyed. In a few instances, Specimen certificates we made for a company but were never used because a different design was chosen by the company. These certificates are normally stamped "Specimen" or they have small holes spelling the word specimen. Most of the time they don't have a serial number, or they have a serial number of 00000. This is an exciting sector of the hobby that grown in popularity over the past several years.