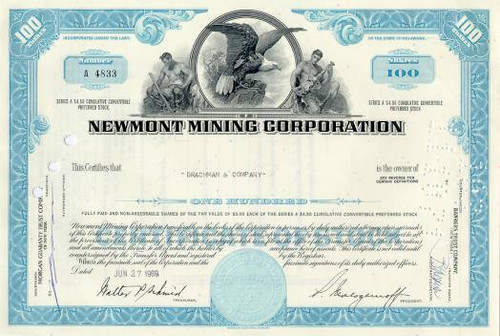 Beautifully engraved Certificate from the Newmont Mining Corporation issued in 1971. This historic document was printed by the American Banknote Company and has an ornate border around it with a vignette of an eagle flanked by two allegorical men. This item has the printed signatures of the company's officers and is over 35 years old. Newmont Mining Corporation was founded in 1921 in New York by Colonel William Boyce Thompson as a holding company to invest in worldwide mineral, oil, and relations companies. The name Newmont was chosen by Thompson as a contraction of New York, and Montana, because, as one biographer put it, "he grew up in the latter and made his money in the former." 1n 1929, Newmont became a mining company with its first gold production by acquiring California's Empire Star Mine. By 1939, Newmont was operating 12 gold mines in North America. The following year, O'okiep Copper Company came into full production in South Africa. O'okiep formed the base for Newmont to eventually become the world's third largest copper producer, with interests in eight copper operations worldwide. Beginning in 1925 Newmont acquired interests in a Texas oil field. Eventually, Newmont's oil interests included more than 70 blocks in the Louisiana Gulf area and oil and gas production in the North Sea.