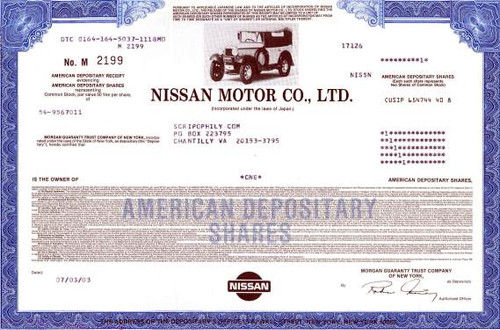 Beautifully engraved certificate from the Nissan Motor Company . This historic document was printed by the Security-Columbian Banknote Company and has an ornate border around it with a vignette of an early motor car.

Certificate Vignette
Japanese car manufacturer founded in 1934. Its production of motor vehicles, initially marketed under the name of Datsun and then as Nissan. Nissan Motor Company is Japan's #2 auto manufacturer after Toyota and just ahead of Honda, is back in the black after a patch of bad road. Nissan's models include Maxima and Sentra cars, Altima and Infiniti upscale sedans, Frontier pickups, the 350Z sports car, and Xterra and Pathfinder SUVs. In 1999 French automaker Renault took a 37% stake in Nissan, and installed president and CEO Carlos Ghosn (nicknamed "Le Cost Cutter" based on his talent for turning red ink black) who has since returned the company to profitability after years of losses. Renault now owns almost 45% of Nissan.