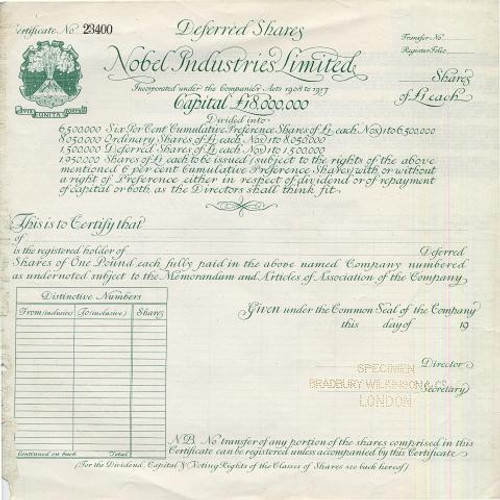 Beautifully printed RARE Specimen certificate from the Nobel Industries Limited printed in 1925. This historic document was printed by the Bradbury, Wilkinson & Co., London. Bradbury, Wilkinson & Co. was founded by Henry Bradbury in the middle of the 19th century. The company was taken over by American Banknote company (ABNC) almost 100 years ago but kept brand name. Worn on left margin. The certificate has a vignette of company's logo ( active volcano ) and is over 82 years old. This is the only second time we have seen this certificate. 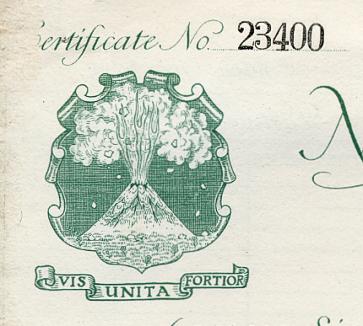 Certificate Vignette
Nobel Industries Limited, was a successful explosives concern was established in Scotland in 1870 by Alfred Nobel, the inventor of dynamite and founder of the annual Nobel Prizes. In 1926, Imperial Chemical Industries ( Now called ICI ) was formed when the four largest chemical companies in the UK merged to become a major force in the industry. The four were Brunner, Mond; Nobel Industries; British Dyestuffs; and United Alkali. About Specimens Specimen Certificates are actual certificates that have never been issued. They were usually kept by the printers in their permanent archives as their only example of a particular certificate. Sometimes you will see a hand stamp on the certificate that says "Do not remove from file". Specimens were also used to show prospective clients different types of certificate designs that were available. Specimen certificates are usually much scarcer than issued certificates. In fact, many times they are the only way to get a certificate for a particular company because the issued certificates were redeemed and destroyed. In a few instances, Specimen certificates we made for a company but were never used because a different design was chosen by the company. These certificates are normally stamped "Specimen" or they have small holes spelling the word specimen. Most of the time they don't have a serial number, or they have a serial number of 00000. This is an exciting sector of the hobby that grown in popularity over the past several years.