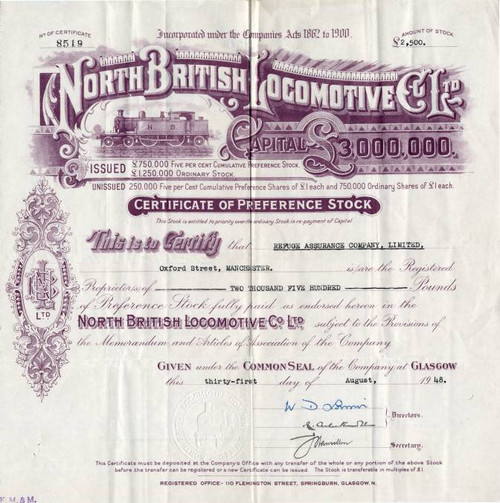 Beautiful certificate from the North British Locomotive Company Limited issued in 1948. This historic document was printed by the K.M.& M. Company and has an ornate border around it with a vignette of the company name with locomotive. This item has the original signatures of the Company's Directors, and Secretary, and is over 64 years old.

Certificate Vignette
The North British Locomotive Company (NBL or North British) was created in 1903 through the merger of three Glasgow locomotive manufacturing companies; Sharp Stewart and Company (Atlas Works), Neilson, Reid and Company (Hyde Park Works) and DÃ¼bs and Company (Queens Park Works), creating the largest locomotive manufacturing company in Europe. Its main factories were located at the neighbouring Atlas and Hyde Park Works in central Springburn, as well as the Queens Park Works in Polmadie. A new central Administration and Drawing Office for the combined company was completed across the road from the Hyde Park Works on Flemington Street by James Miller in 1909, later becoming the main campus of North Glasgow College. The two other Railway works in Springburn were St. Rollox railway works, owned by the Caledonian Railway and Cowlairs railway works, owned by the North British Railway. In 1918 NBL produced the first prototype of the Anglo-American Mark VIII battlefield tank for the Allied armies, but with the Armistice it did not go into production. History from Encyberpedia and OldCompany.com (old stock certificate research service)