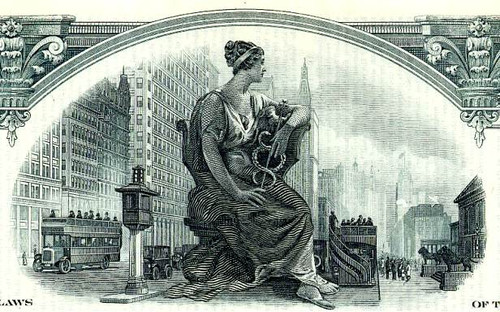 Beautifully engraved RARE SPECIMEN certificate from the Omnibus Corporation printed in 1924. This historic document was printed by the Columbian Banknote Company Chicago and has an ornate border around it with a vignette of a woman with buildings and an early double decker bus in the background. 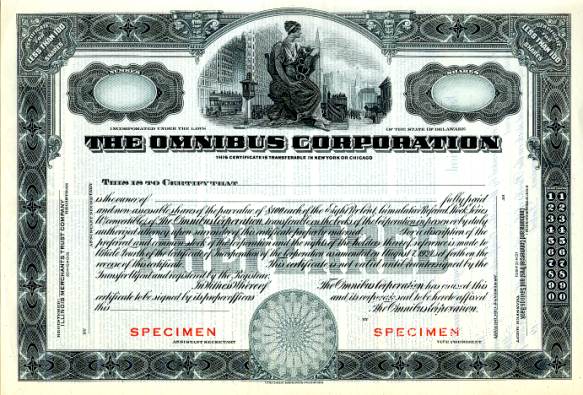 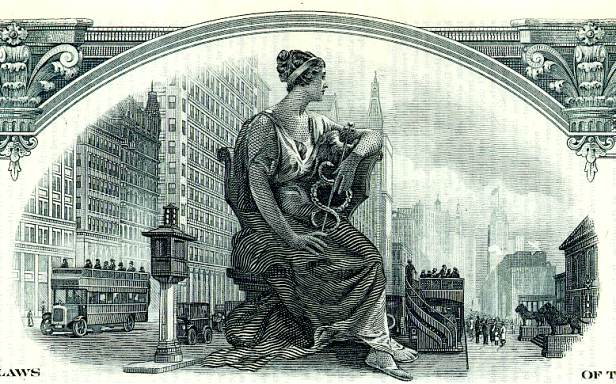 Certificate Vignette
John Hertz believe that taxicabs were not rugged enough to withstand the hard service to which taxicabs were put in the early days, when country roads and even side streets were a far cry from the smooth streets and highways of today. Mr. Hertz decided that it would be necessary to build a taxicab that could take such punishment, and so he organized the Yellow Cab Manufacturing Company. Mr. Hertz also organized the Hertz Drive-Yourself Corporation in 1924 in order to further develop the market for the automobiles produced by this company. He commenced to conduct, on a nationwide basis, the business of leasing cars and trucks, a radical idea for its time. In 1926 the Yellow Cab Manufacturing Company, including the Drive-Yourself Division, was sold to General Motors and Mr. Hertz joined the Board of Directors of GM at the age of 46. John Hertz's interest in transportation motivated him to take a leading role in the development of the urban motorbus systems of New York. Mr. Hertz was responsible for the creation of the plan under which the street railways of New York were converted to motorbus systems. Control of operations, in New York through the Fifth Avenue Coach Company, and in Chicago through the Chicago Motor Coach Company, was vested in the Omnibus Corporation, formed for that purpose. Eventually, the Chicago Motor Coach Company was sold to the Chicago Transit Authority, and the Omnibus Corporation acquired the Hertz Drive-Yourself System from General Motors Corporation, disposing of its New York City bus operations in the process. The name Omnibus Corporation was changed to the Hertz Corporation, which now carries on a worldwide truck and automobile renting and leasing business. About Specimen Certificates Specimen Certificates are actual certificates that have never been issued. They were usually kept by the printers in their permanent archives as their only example of a particular certificate. Sometimes you will see a hand stamp on the certificate that says "Do not remove from file". Specimens were also used to show prospective clients different types of certificate designs that were available. Specimen certificates are usually much scarcer than issued certificates. In fact, many times they are the only way to get a certificate for a particular company because the issued certificates were redeemed and destroyed. In a few instances, Specimen certificates we made for a company but were never used because a different design was chosen by the company. These certificates are normally stamped "Specimen" or they have small holes spelling the word specimen. Most of the time they don't have a serial number, or they have a serial number of 00000. This is an exciting sector of the hobby that grown in popularity and realized nice appreciation in value over the past several years.