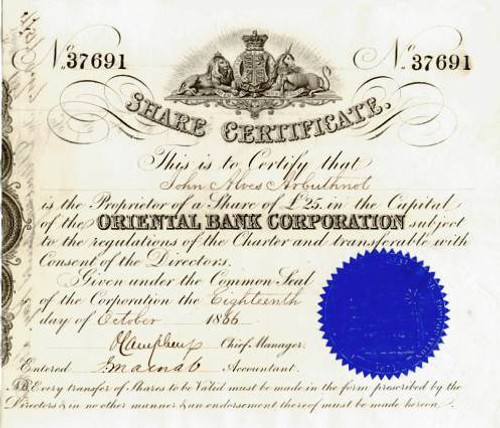 Beautiful certificate from the Oriental Bank Corporation issued in 1853. This historic document has an ornate block with a vignette of a crowned lion and unicorn flanking a coat of arms next to Latin text. This item is hand signed by the company's chief manager and accountant and is over 157 years old. There is an blue embossed seal with a tree next to old oriential building and a steam ship in the background and a Tom Thumb train in the foreground. Chartered in 1851 mainly to allow competition with the East India Company monopoly which was unpopular in England at the time. Expansion followed with branches opening in Chinese Treaty ports, Hong Kong, Japan, India, Mauritius and South Africa. Held a dominant position in Eastern Banking for some years and despite the financial crisis of 1865/6 it prospered until 1885 when it ran into severe difficulties and had to be reconstituted as the New Oriental Bank Corporation. In 1851, Oriental Bank Corporation of Great Britain established a branch in Shanghai. It was the first foreign bank in China.With the growth of other banks such as the Hong Kong and Shanghai and the Chartered Bank the new organisation was never succesful and it finally closed its doors in 1892.

Bank of the Valley in Virginia - Winchester, Virginia 1853