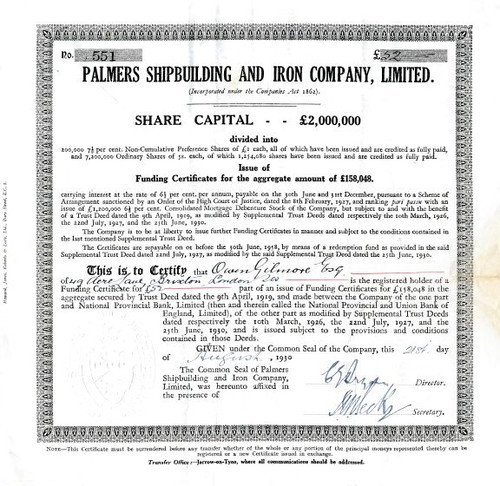 Beautiful certificate from the Palmers Shipbuilding and Iron Company, Limited issued in 1930. This historic document was printed by Howard, Jones, Roberts & Leete, Ltd. and has an ornate border around it. This item has been hand signed by the Company's Director, and Secretary, and is over 82 years old. Palmers Shipbuilding and Iron Company Limited, often referred to simply as Palmers, were a British shipbuilding company established in 1852 by Charles Mark Palmer. They were based in Jarrow, in Northeast England and also had operations in Hebburn on the River Tyne. The latter yard was later absorbed by the Vickers Armstrong concern and formed into Palmers Hebburn Company Limited, a ship repair establishment with the largest graving dock in the North East of England. History from Encyberpedia and OldCompany.com (old stock certificate research service)