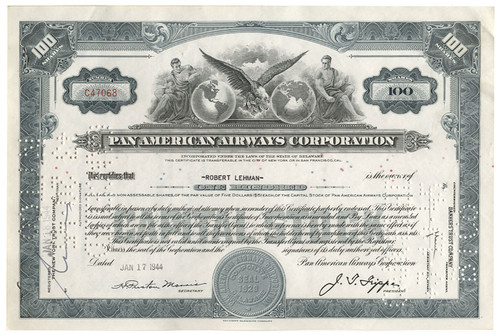 Pan American Airways Stock Certificate Issued to and Signed: Robert Lehman Robert Lehman was an American banker who headed Lehman Brothers and was a well-known racehorse owner. Lehman Brothers was a global financial services firm that was the fourth largest investment bank in the US before declaring bankruptcy in 2008. Lehman was known for his success with "betting on people." Lehman would often invest in businesses or operations that were put together and headed by people he had faith in. One of those people was Juan Trippe and his Pan American Airlines. Lehman invested significant funds into Pan AM that helped get the company of the ground.