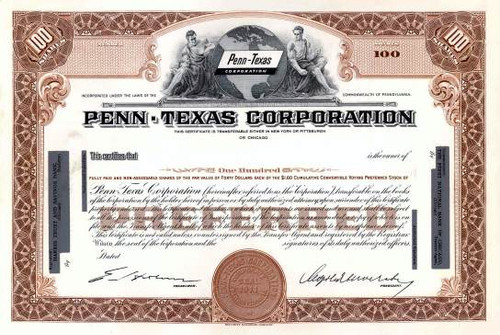 Beautifully engraved SPECIMEN certificate from the Penn -Texas Corporation. This historic document was printed by the Security Banknote Company in 1955 and has an ornate border around it with a vignette of allegorical men by the company logo. This item has the printed signatures of the Company's President and Treasurer and is over 47 years old.

Certificate Vignette
The manufacturing tradition of Coltec Industries dates back to the 19th century, when many of its operating units were already building a wide range of products, including large engines, industrial sealing products and windmills. Even then, the company produced technically superior products that commanded premium margins. Many of the company's manufacturing operations were started by entrepreneurial engineers including: Samuel Colt who was making firearms by 1836. O.J. Garlock who patented his first industrial sealing system in 1887. Charles Morse who manufactured the first internal combustion engine marketed successfully in the United States in 1893. The Holley brothers who developed an automobile by 1903. Beginning in the 1950s, these manufacturing companies were acquired by the Pennsylvania Coal and Coke Corporation, a predecessor to Coltec that originated in 1911 as a coal mining company. With manufacturing now the dominant business, the company name was changed to the Penn-Texas Corporation in 1954. The name was changed again in 1959 to the Fairbanks Whitney Corporation, following the merger with Fairbanks Morse and Co. In 1964 the name was changed to Colt Industries. At the same time, a strategy was implemented to: Achieve leading market positions Maintain technological leadership Build close customer relationships Sustain superior operating profits In 1990, the name was changed to Coltec Industries to reflect the sale of the firearms business. In 1996, Coltec divested its automotive operations and restructured the company to focus on opportunities for growth in the aerospace and industrial operations. At this time, the corporate headquarters moved to Charlotte, North Carolina, to provide easier access to operations and customers. In 1999, Coltec Industries merged with Goodrich to form a $6 billion, Fortune 300 company. The Coltec aerospace business, which consists primarily of landing gear systems and engine components, is now part of Goodrich Aerospace. Coltec's industrial segment is now BFGoodrich's Engineered Industrial Products segment, offering a wide range of consumable products for high-performance applications.