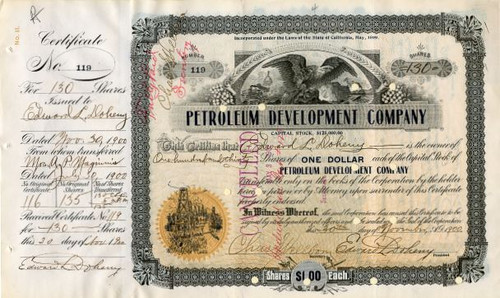 Beautiful certificate from the Petroleum Development Company issued in 1900. This historic document has an ornate border around it with a vignette of an eagle and oil derreck over the embossed corporate seal. This item has the signatures of the Company's President, Edward L. Doheny and Secretary, Charles Wellborn and is over 109 years old. The certificate was issued to Edward L. Doheny and is signed by him on the left ledger page and on the verso. Punched cancellation doesn't affect any of the three Bold Doheny signatures.