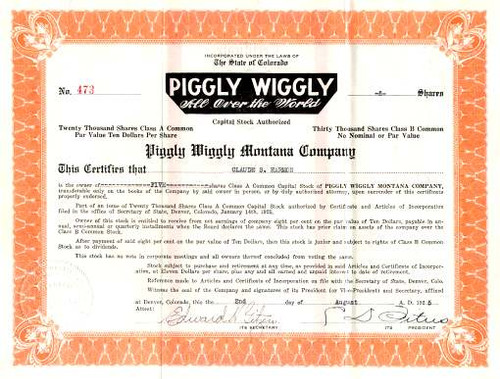 Beautifully engraved certificate from the Piggly Wiggly Company issued in 1925-1926. This historic document has an ornate border around it with a vignette of the company's logo. This item is hand signed by the company's president and secretary and is over 74 years old. Piggly Wiggly®, America's first true self-service grocery store, was founded in Memphis, Tennessee in 1916 by Clarence Saunders. In grocery stores of that time, shoppers presented their orders to clerks who gathered the goods from the store shelves. Saunders, a flamboyant and innovative man, noticed this method resulted in wasted time and man hours, so he came up with an unheard-of solution that would revolutionize the entire grocery industry: he developed a way for shoppers to serve themselves. Despite predictions that this new kind of store would fail, the first Piggly Wiggly opened September 6, 1916 at 79 Jefferson Street in Memphis. Operating under the unusual name Piggly Wiggly, it was unlike any other grocery store of that time. Shopping baskets, open shelves, no clerks to shop for the customer -- unheard of! Piggly Wiggly Corporation, established by Saunders when he opened the first store in Memphis, secured the self-service format and issued franchises to hundreds of grocery retailers for the operation of Piggly Wiggly stores. The original Piggly Wiggly Corporation became owner of all Piggly Wiggly properties: the name, the patents, etc., and Saunders began issuing stock in the Corporation. This stock was successfully traded on the New York Stock Exchange for some time, but through a series of stock transactions in the early '20s, Saunders lost control of Piggly Wiggly and had no further association with the company. Piggly Wiggly Corporation continued to prosper as franchiser for the hundreds of independently owned grocery stores franchised to operate under the Piggly Wiggly name and over the next several decades, functioned successfully under various owners.