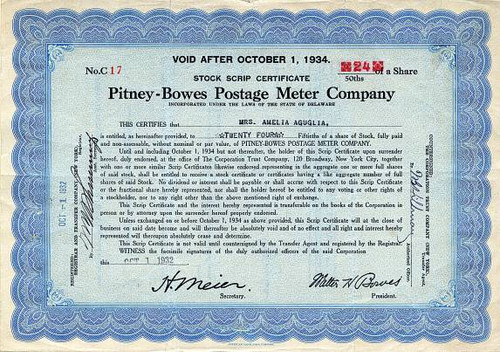 Beautifully engraved certificate # C17 from the Pitney - Bowes Postage Meter Company issued in 1932. This historic document was printed by the American Banknote Company and has an ornate border around it with the company name centered on top. This item has the printed signatures of the Company's President, Walter Bowes and Secretary, and is over 78 years old. This is the earliest certificate we have seen from the Pitney - Bowes Postage Meter Company.

Certificate Vignette
Pitney Bowes Inc. (NYSE: PBI) is a Stamford, Connecticut-based manufacturer of software and hardware and a provider of services related to documents, packaging, mailing, and shipping, collectively referred to as mailstream. The company has approximately 36,000 employees worldwide. It is one of 87 existing firms that have been members of the S&P 500 since its creation in 1957. Other major U.S. centers of operation include Danbury, Connecticut, Shelton, Connecticut, Troy, New York, and Lanham, Maryland. In 1902, Arthur Pitney patented his first "double-locking" hand-cranked postage-stamping machine, and, with patent attorney Eugene A. Rummler, founded the Pitney Postal Machine Company. In 1908, English emigrant and founder of the Universal Stamping Machine Company Walter Bowes began providing stamp-canceling machines to the United States Postal Service. Bowes moved his operations to Stamford in 1917. A rapid increase in mail volume in 1919 made the Post Office more receptive to metered mail, and Pitney subsequently traveled to meet Bowes. On March 15, 1920, the United States House of Representatives passed a bill authorizing mechanical stamps on First-Class Mail, and on April 23, 1920, the two companies merged to form the Pitney Bowes Postage Meter Company, with the goal of producing a machine that would combine Pitney's "double-locking" counter with Bowes's system for wrapping postage payment, postmarking and cancellation. The United States Post Office approved their postage meter on August 25, 1920. Between 1922 and 1923, the government collected $4,359,070 in postage from the first commercial installations of 400 meters. Pitney Bowes also began to sell their products internationally. In 1938, Walter H. Wheeler, Jr. was named President and Chairman of the Board and would lead the company over the next three decades. In the 1940s, Wheeler boycotted a hotel when it refused to register one African American salesperson, championing a spirit of diversity that still exists today, writing: "Pitney Bowes' worksites will reflect the communities in which we operate." Pitney-Bowes received an Army-Navy 'E' Award denoting excellence in production of crucially needed instruments of war on February 1, 1943. The company was listed on the New York Stock Exchange in 1950. The same year, the National Urban League recognized Pitney Bowes for its leadership in providing job opportunities to African Americans. Pitney Bowes was named to the S&P 500 at the time of its creation in 1957 and joined the Fortune 500 in 1962. In 1968 Pitney Bowes acquired the Monarch Marking System Company, which would produce the first barcode equipment for retail trade use. In 1976, the Pitney Bowes Credit Corporation was formed, providing customers with financing and payment solutions. (Pitney Bowes would continue to grow this line of business, launching the Pitney Bowes Bank in 1996.) In the 1980s, the firm expanded, offering copy machines and facsimile machines, a suite of management services and entering new markets, such as Japan. In the 1990s, Pitney Bowes continued to innovate in the field of digital technologies and software, introducing the AddressRight address & barcode printer (1991), the first in-line weighing and metering system (1992), the first secure digital postage meter (1995), the first ink jet postage meter (1996) and the Digital Document Deliver (D3) platform (1998) which provides message management via hard copy, web, email and fax. Between 2000 and 2007, Pitney Bowes invested $2.5 billion in 83 acquisitions, primarily in software and services businesses including MapInfo, Group 1 Software, PSI Group and Imagitas. The company is known as an industry advocate, and has focused in recent years on advancing postal reform, the USPS Intelligent Mail barcode, transpromo and environmental sustainability. Pitney Bowes intellectual property portfolio includes more than 3,500 patents worldwide in areas such as ticketing, cellular phone payment, shipping, laser printing, encryption and mail production and processing. The Intellectual Property Owners (IPO) Association has consistently ranked Pitney Bowes in the top 200 companies receiving U.S. patents. Six of these patents are held by retired Executive Chairman Michael J. Critelli. History from Wikipedia and OldCompany.com (old stock certificate research service).