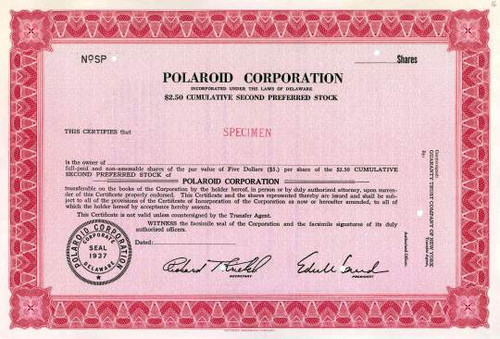 Beautifully engraved SPECIMEN certificate from the Polaroid Corporation. This historic document was printed by the Security Banknote Company in the 1950's and has an ornate border around it. This item has the printed signatures of the Company's President and Secretary. This is the first time we have seen this certificate for sale. 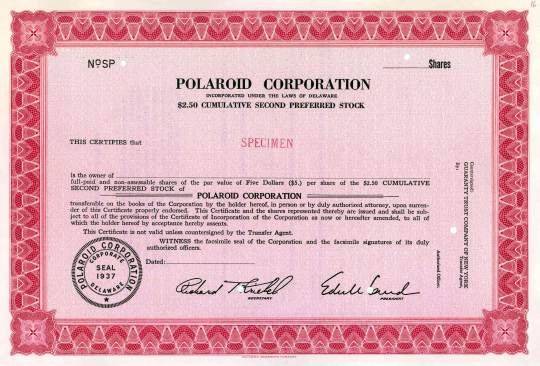 Certificate
Edwin Herbert Land - Born May 7 1909 - Died Mar 1 1991 During his lifetime he was awarded six honorary doctorates. Land spent nearly all of his life engaged in research and development of optical devices. During World War II he developed optical and other systems for military use and proposed the retinex theory for mechanism of color perception, in addition to creating cameras and films that gave instantaneous dry photographs in black and white and color. But he is best remembered for the instant-photo film and cameras made famous by the company he founded, Polaroid Corporation. In 1926, Polaroid's founder, Edwin H. Land, left Harvard University after his freshman year to conduct research on light polarization. In 1928, he invented the first synthetic sheet polarizer and filed for a patent in 1929. Its possible uses include photographic filters, sunglasses, and glare-reducing windows for planes. The first poloroid camera was sold to the public in November, 1948. In 1960, Land approached the Henry Dreyfuss design company to collaborate on a new camera design, the result of which was the Automatic 100 Land Camera and then Polaroid Swinger camera in 1965. The black and white Swinger camera sold for under $20 and was a big hit with consumers. On April 26, 1976, one of the largest patent suits involving photography was filed in the U.S. District Court of Massachusetts. Polaroid Corporation, the assignee of numerous patents relating to instant photography, brought an action against Kodak Corporation for infringement of 12 Polaroid patents relating to instant photography. On October 11, 1985, after five years of vigorous pretrial activity and 75 days of trial, seven Polaroid patents were found to be valid and infringed. Kodak was out of the instant picture market leaving customers with useless cameras and no film. Kodak offered camera owners various compensation for their loss. Just as the horse and buggy companies didn't adapt to the automobile, the Polaroid Corporation missed the boat on Digital Photo Storage Technology. The use of film photography is becoming the exception and the growth trend is clearly towards the less expensive digital technology. The Polaroid Corporation makes instant film and cameras (about 75% of sales), digital cameras and peripherals, conventional film, imaging equipment, and security ID-card systems. Polaroid's I-Zone instant camera (which produces thumbnail-size images) is the world's top-selling camera; its success was key in returning the company to profitability in 1999 (a condition not seen since 1994). Restructuring to focus on its instant and digital photography products, Polaroid is selling most of its noncore operations (graphics, sunglasses). The company has also begun cutting jobs to help reduce its sizable debt. About 35% of Polaroid's sales come from outside the Americas. NEW YORK October 12, 2001 - Polaroid Corp. filed for voluntary Chapter 11 bankruptcy protection in Delaware Friday, capping three days of speculation in which the instant photography company's stock had not traded. The company, which has been struggling with more than $900 million in debt, said it still is considering an outright sale of all or part of the company and that it plans to cut further staff, close facilities and sell non-core assets to reduce costs.