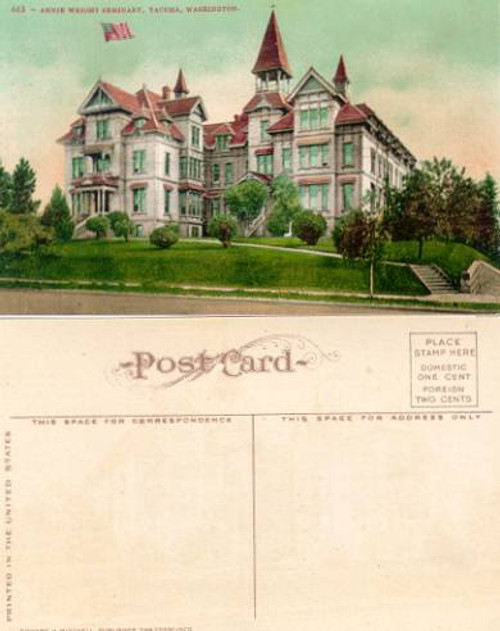 Beautifully printed postcard designed and published by Edward H. Mitchell, San Francisco, California in 1910. This beautiful postcard has an image of a large Victorian home sitting on a hill and is over 90 years old. Annie Wright is an independent, college preparatory school for girls and boys in grades PreK through 8th and girls in grades 9 through 12. Our beautiful 10-acre campus is located in Tacoma, Washington, just 30 minutes south of Seattle. Annie Wright School, the oldest boarding school in the Pacific Northwest, combines 117 years of rich heritage and tradition with an Upper School program designed to strengthen young women with the self-confidence, talent, and skills they will need for the future. The School was founded in 1884 under the auspices of the Episcopal Church by Charles Wright, President of the Northern Pacific Railroad, and the Right Reverend John A. Paddock, the first Episcopal bishop of the Washington Territory. The original seminary developed the goal that the School still follows today: to prepare girls for higher education by stressing academic excellence and spiritual and physical growth. Annie Wright School's curriculum provides a structured course of study to assist students in developing their own skills, talents, and intellects; in seeking and accepting challenges; and in making decisions and discovering emergent values. The School encourages and expects students to develop an awareness and concern for people in all communities and an appreciation and sensitivity to the environment. A student's years at Annie Wright are a time for growing intellectually, physically, culturally, and spiritually. At the Upper School level, the School is more than an academic institution dedicated to the provision of a serious college-preparatory education; it is a community in which young women learn, live, and grow together as individuals. To grow to be strong and effective human beings, young women need a time and a place in which to concentrate on their personal development. Annie Wright provides a learning environment in which there need be no limits, in which there is freedom to be one's own best self, and in which special strengths are fostered and nourished. The campus is on a scenic 10-acre site in Tacoma's historic North End. It has a commanding view of Commencement Bay, Puget Sound, and the snowcapped Olympic Mountains to the west. The Tudor architecture and red brick walls of its main building provide an environment that is both charming and secure. The rolling lawns gently slope down to a large athletics field and the Kemper Center for athletics and performing arts. The city of Tacoma, which has a population of more than 200,000, is located 30 miles south of Seattle, Washington; 120 miles north of Portland, Oregon; and 150 miles south of Vancouver, British Columbia. The School is a nonprofit institution owned by the Foundation Board and supervised by a 28-member Board of Trustees, which meets quarterly. Among its members are alumnae and parents as well as interested community leaders. The bishop of the Diocese of Olympia is a permanent member. Annie Wright is accredited by the Northwest Association of Schools and Colleges. Its memberships include the Washington Federation of Independent Schools, the National Association of Episcopal Schools, the National Association of Independent Schools, the Pacific Northwest Association of Independent Schools, and the National Association of Principals of Schools for Girls.

Postcard from Tacoma, Washington, The Gateway to Rainier National Park 1910