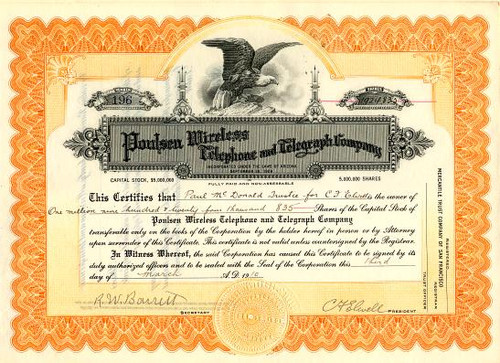 Beautiful uncancelled certificate from the Poulsen Wireless Telephone and Telegraph Company issued in 1909. This historic document has an ornate border around it with a vignette of an eagle. This item has the signatures of the Company's President, Cyril Frank Elwell and Secretary and is over 103 years old.

Certificate Vignette
San Francisco was the site of one of the first major wireless stations in the United States with the founding of the "Poulsen Wireless Corporation of Arizona" in 1910 and, later, the Federal Telegraph Company. Though called an Arizona company, it was founded here in San Francisco and transmitted from a site on 48th Avenue between Noriega and Ortega streets, at the Ocean Beach. Primary force behind the commercial development of Valdemar Poulsen's arc wireless transmission method was Cyril Frank Elwell (1884- 1963), who convinced the inventor to license his patents in the United States to him. Elwell was employed by San Francisco Investors to investigate all the existing wireless systems and in 1909 he came to the conclusion that the most promising system was the Poulsen. After ascertaining that the rights were for sale, he went to Denmark and had the system demonstrated to him between Lyngby and Copenhagen. He made a contract with the owners to purchase the patent rights for America, and on returning to America he organized the Poulsen Wireless Telephone & Telegraph Co. with a capital of $5,000,000. This company in 1911 was merged into another company known as the Poulsen Wireless Corporation. It was a large company, and to avoid taxation in different states it was reorganized and operated under the name of the Federal Telegraph Company. After successful operation of the Elwell stations, San Francisco capitalist Beach Thompson became interested in commercial application of the system for reliable wireless communication over land. He found Elwell's stations could provide service over practical distances, and, in 1910, the "Poulsen Wireless Company of Arizona" was formed, which held all stock of the Federal Telegraph Company. The holding company was organized in Arizona for tax purposes, but always operated from San Francisco. Just after the company was formed, Elwell hired inventor Lee DeForest to develop practical receiver amplifiers for the Poulsen wireless system. Founders of the companies were Beach Thompson, president; E.W. Hopkins, vice-president; Howard P. Veeder, secretary and treasurer; Cyril F. Elwell, chief engineer; John F. Deahl, J. Henry Meyer, Stanford engineering professor Charles D. Marx, Carl Philip, George A. Pope, and S.E. Slade members of the board. Cyril Frank Elwell, who earned his engineer's degree at Stanford University in 1908, was a pioneer engineer in radio-telegraph research and long-distance communications. Along with other Stanford engineers, he was active in early electronics firms in Palo Alto, California.